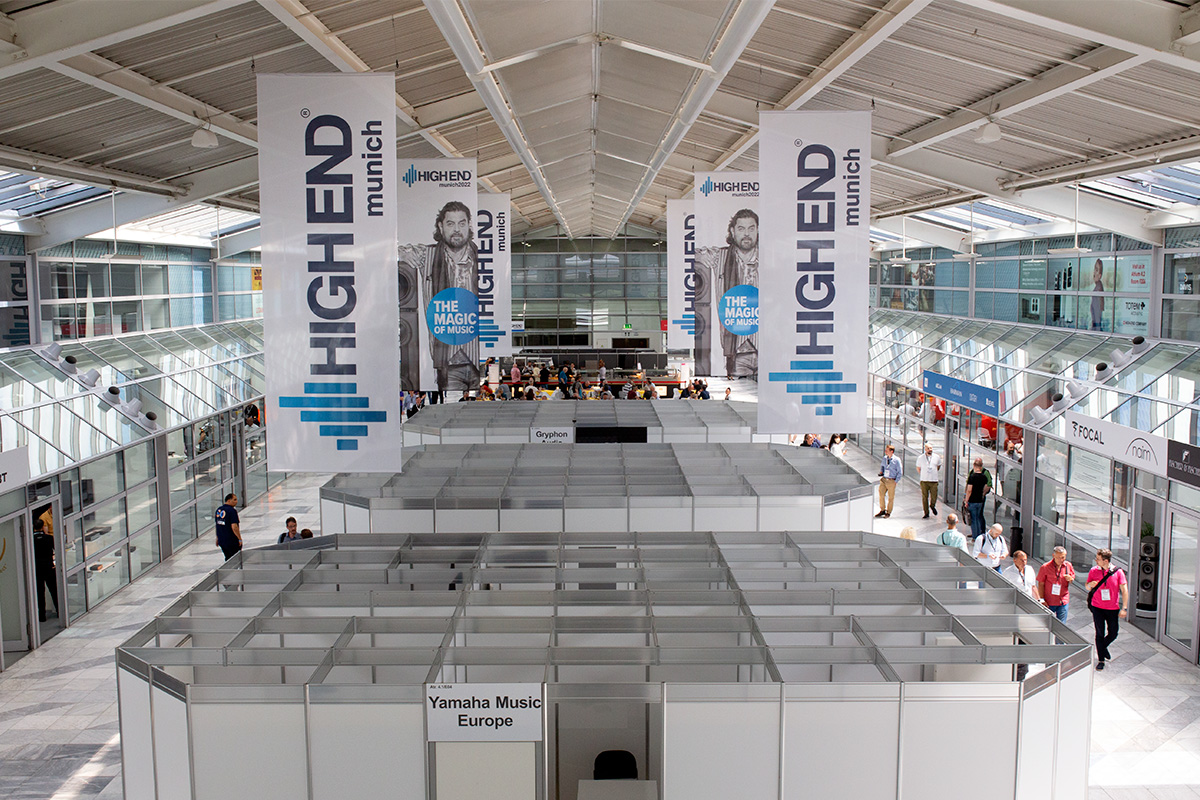 The greatest audio show on earth is back. After a two-year, pandemic-induced hiatus, the 2022 Munich High End show took place from May 19 to 22. The SoundStage! Network sent a four-person editorial team to Bavaria: founder and publisher Doug Schneider; editor-in-chief Jeff Fritz; Edward Kramer, editor of SoundStage! Australia; and Jonathan Gorse, a UK-based contributor to SoundStage! Ultra. Together, they filed 18 dispatches from Munich, which you can find on SoundStage! Global.

Six of these articles focused on new product launches. In a new twist for SoundStage!, our team also produced 11 “Sights and Sounds” reports—short photo stories about systems in Munich’s demo rooms. Some featured systems sporting six-figure price tags—oligarch audio, to coin a phrase. The final dispatch from Munich was Jeff Fritz’s “Hot Takes”—pithy one-line observations that occurred to Jeff as he passed through the halls of Munich’s MOC.

Given the size of the show—450 exhibitors representing 800 brands—there was no way our team could cover every new product launch, even with four reporters putting in 18-hour days. Many of their reports focus on conventional component hi-fi, but they also covered some Simplifi’d hi-fi products with streaming capability, carrying price tags that mere mortals can manage. In this report, I want to discuss some new Simplifi’d products that were included in our Munich coverage, and a few that weren’t.

KEF LS60 Wireless: As our E-in-C noted in his “Hot Takes” piece, “the most talked-about product announcement right before High End 2022 was the KEF LS60 Wireless speaker system. It wasn’t at High End 2022.” Announced on May 12, exactly one week before the Munich show opened, KEF’s LS60 active floorstanding speaker system ($7000, all prices in USD unless noted otherwise) is available in Mineral White, Royal Blue, or Titanium Grey matte finishes. Shipments are scheduled to begin in late June.

The all-in-one LS60 incorporates a lot of groundbreaking technology—Jeff wasn’t exaggerating when he called it “the most talked-about [pre-Munich] product announcement.” 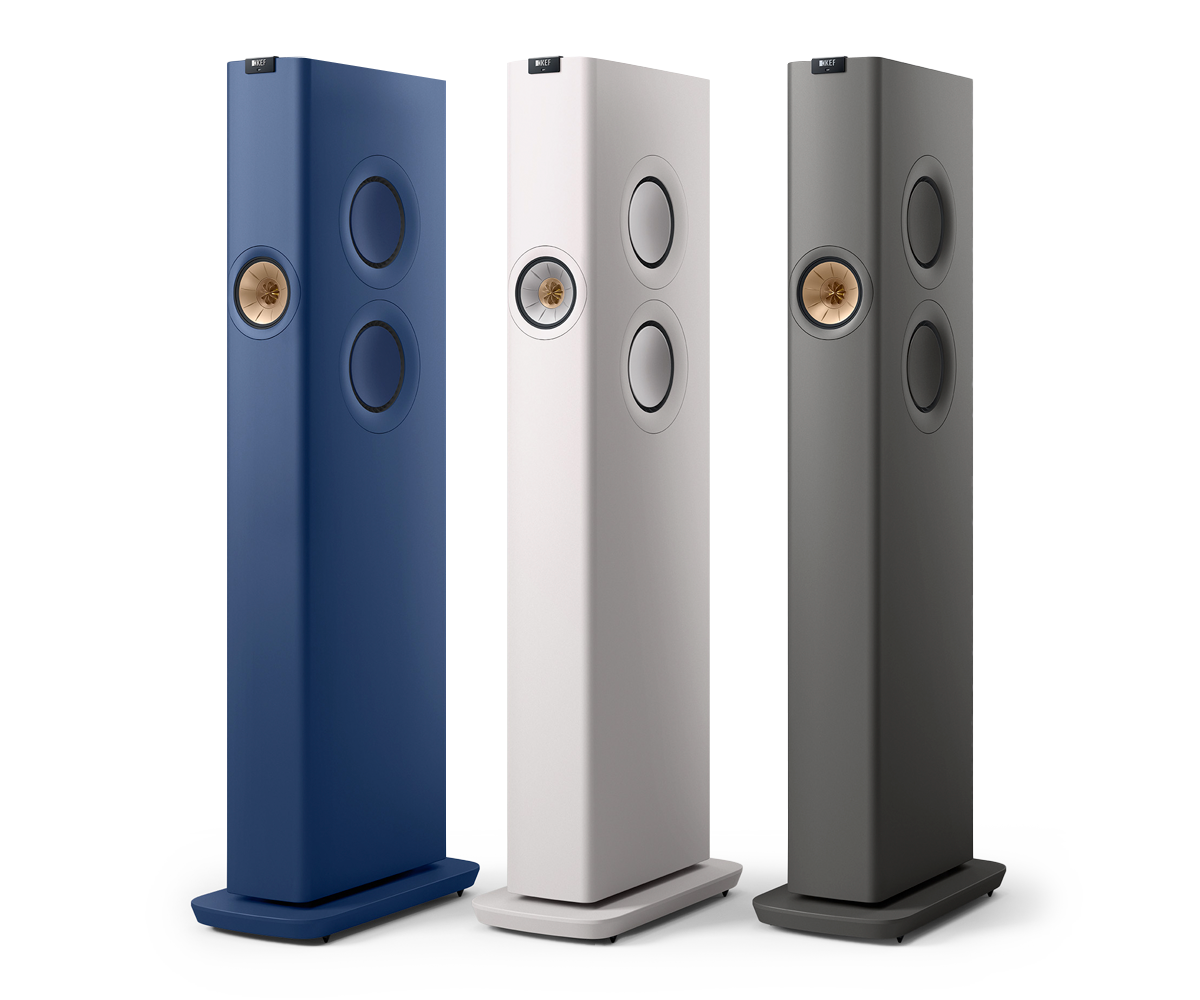 On the front baffle of each enclosure is a Uni-Q driver array with a waveguided 0.75″ aluminum-dome tweeter placed at the acoustic center of a 4″ midrange driver. The Uni-Q driver features KEF’s Metamaterial Absorption Technology, a labyrinth-like structure behind the driver that absorbs rearward energy from the tweeter, preventing it from interfering with the tweeter’s frontward radiation. The tweeter is powered by a 100W class-AB amp and the midrange by a 100W class-D amp.

On the sides of each enclosure are two Uni-Core woofer arrays, each comprising two 5.25″ drivers mounted in a back-to-back, force-canceling configuration. Their overlapping voice coils are of different diameters, each operating in its own voice-coil gap. The four woofers are powered by a 500W class-D amp. KEF’s Uni-Core technology made its debut on the diminutive KC62 subwoofer ($1499), but interestingly, KEF actually developed the technology for the LS60.

Together, the Uni-Q and four Uni-Core woofers enable the LS60 to behave as a point source—just like KEF’s flagship Blade One Meta and Blade Two Meta passive speakers, which have a similar configuration but are much larger and more expensive. 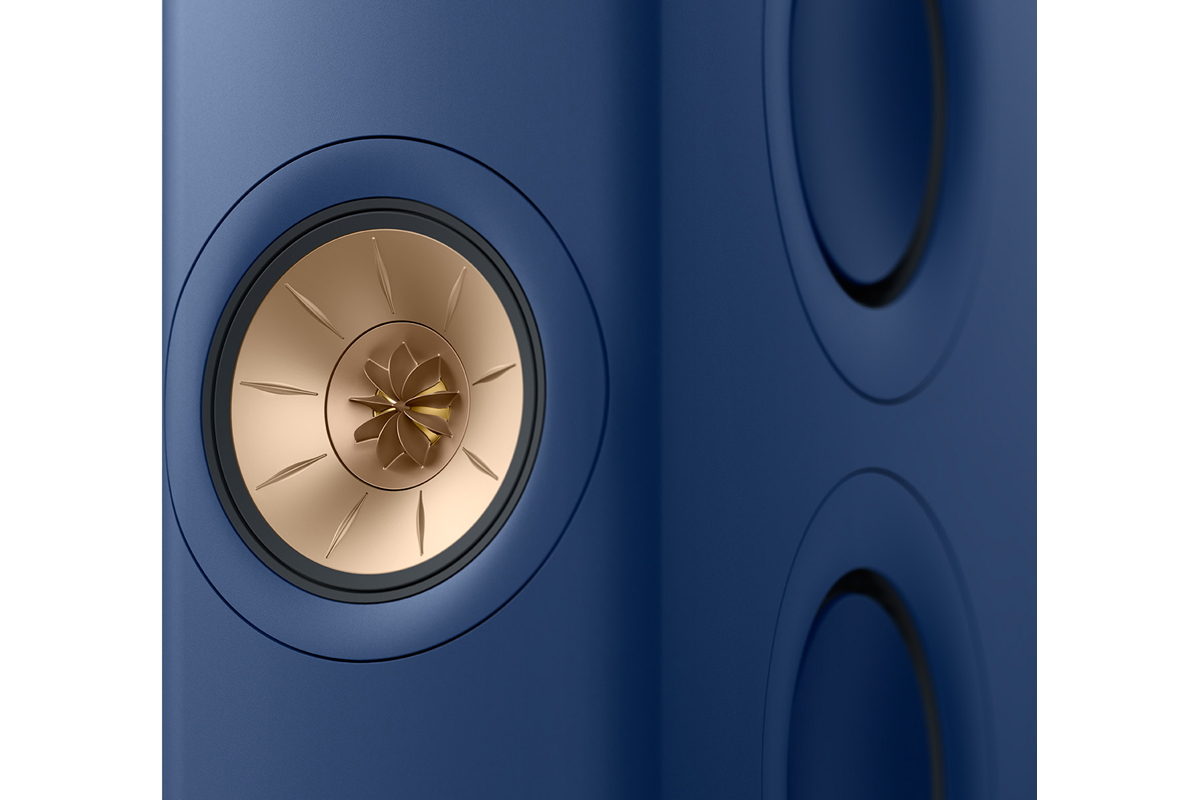 The primary speaker has HDMI eARC, coaxial and optical S/PDIF, and RCA analog inputs, as well as built-in Wi-Fi and Bluetooth and an ethernet port. The companion KEF Connect app has integrated support for Amazon Music HD, Deezer, and Qobuz. The LS60 is Roon Ready, and supports Apple AirPlay 2, Google Chromecast, Spotify Connect, and Tidal Connect. Maximum resolution via Wi-Fi and ethernet is 32-bit/384kHz PCM; the LS60 also supports DSD and MQA. The primary speaker can send audio wirelessly to the secondary speaker at 24/96 resolution, or via an ethernet cable at 24/192.

KEF is sending me an LS60 system for a review on Simplifi. I can’t wait to hear these speakers in my living room. You can expect a review of the LS60 on Simplifi in late summer or early fall. 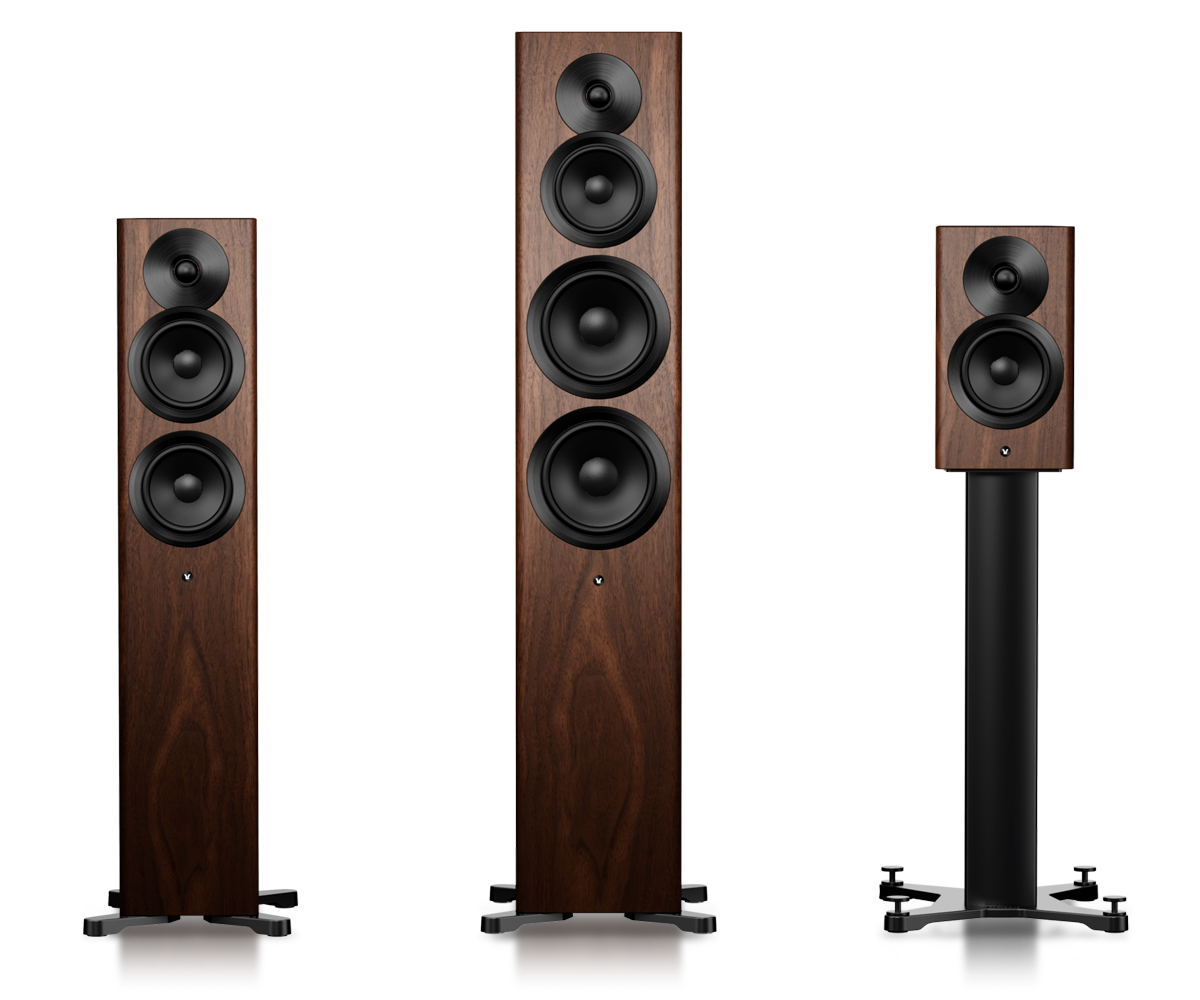 Unlike Dynaudio’s previous-generation Focus XD speakers, which housed most of the connectors in the optional Connect wireless transmitter, all inputs and outputs are on the primary speaker in the new Focus lineup. These include line-level analog and coaxial and optical S/PDIF inputs, and an autosensing subwoofer output. In addition to a wired connection, the primary speaker can also send audio to the secondary speaker wirelessly, using WiSA technology. Focus speakers can also receive audio wirelessly from a component with a WiSA transmitter. Some LG TVs have this capability; so does Primare’s SC15 Prisma streaming DAC-preamp.

The primary speaker also has Wi-Fi and Bluetooth connectivity, plus an ethernet port. The system is Roon Ready and supports AirPlay 2, Google Chromecast, Spotify Connect, and Tidal Connect.

Besides implementing the active crossover, the digital signal processor in a Focus speaker performs some other neat tricks. It automatically adjusts EQ when the grille is removed or replaced. Like the Focus XD line, the new Focus speakers have DSP-enabled room boundary compensation, with settings for placement near a wall, in a corner, or in free space. But this adjustment is now made in a companion app rather than by hardware controls on each speaker. And very interestingly, Dirac Live room correction can optionally be applied to the new Focus. Having heard the benefits of Dirac in my living room, I think this is a killer feature.

I’ve already arranged to get a Focus 30 system in for review. I owned a set of Focus 200 XD active speakers for several years, and loved them; so I’m really looking forward to hearing the new Danish active speakers. 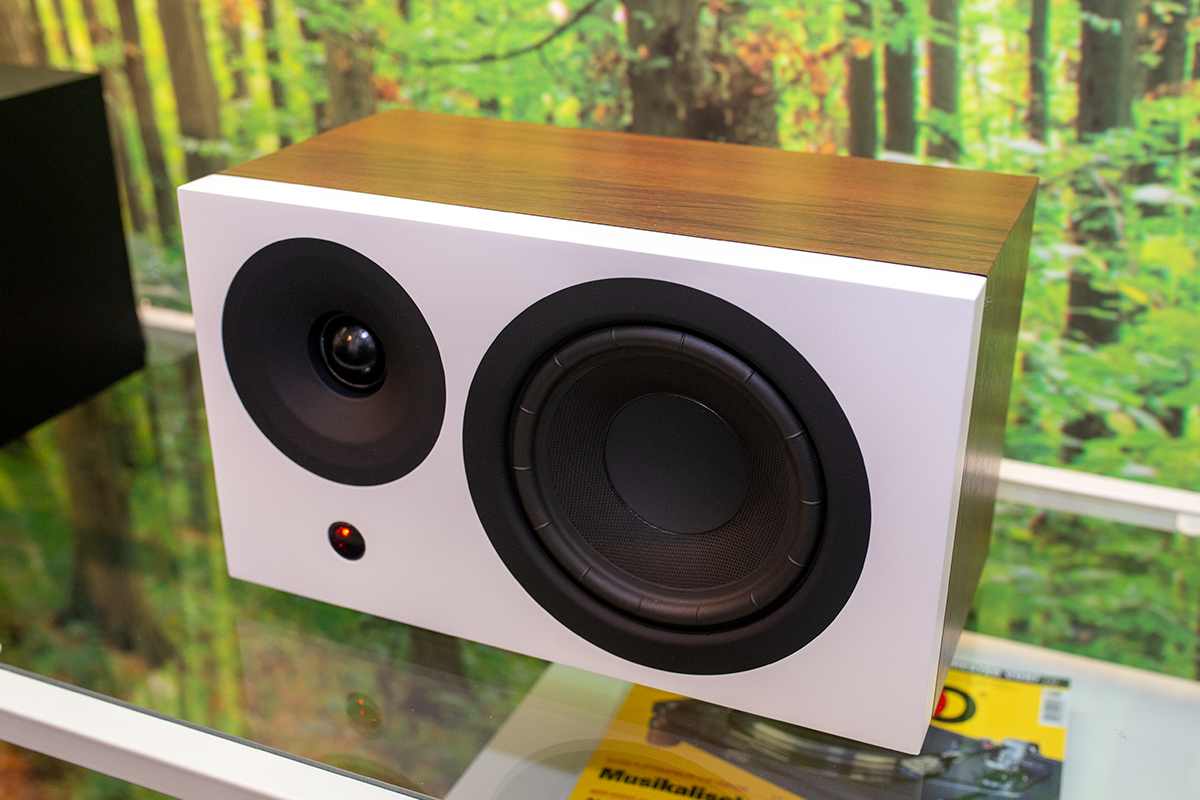 The SA Air 1 looks like a very interesting product, but I’m even more intrigued by the Legend 7.2 Silverback active on-wall speakers, which were on static display at High End 2022.

The SA Legend 7.2 Silverback is 6″ deep. A sealed, 2.5-way design, it houses two 5.3″ carbon-fiber drivers and a 1″ silk-dome tweeter surrounded by a DXT (Diffraction eXpansion Technology) acoustic lens. Each driver has a dedicated Texas Instruments power DAC; total system power is 225W. Thanks to the 6dB of room gain provided by on-wall placement, the Legend 7.2 Silverback can play quite low in the bass—specified frequency response is 35Hz–25kHz, ±1.5dB. The speaker can be oriented vertically or horizontally, SA says. It’s available in black, white, or walnut finishes.

In addition to an XLR balanced input, each speaker has a WiSA receiver, allowing it to receive 24/96 wireless audio from a WiSA component such as SA’s Stereo Hub. The Stereo Hub has one coaxial and three optical S/PDIF inputs, RCA and 3.5mm mini analog inputs, a USB Type-B port, and an HDMI ARC interface. It supports Apple AirPlay 2, Google Chromecast, and Spotify Connect, and works with the SA Cockpit app, whose features include SA’s Room Service room correction system and adjustable EQ. 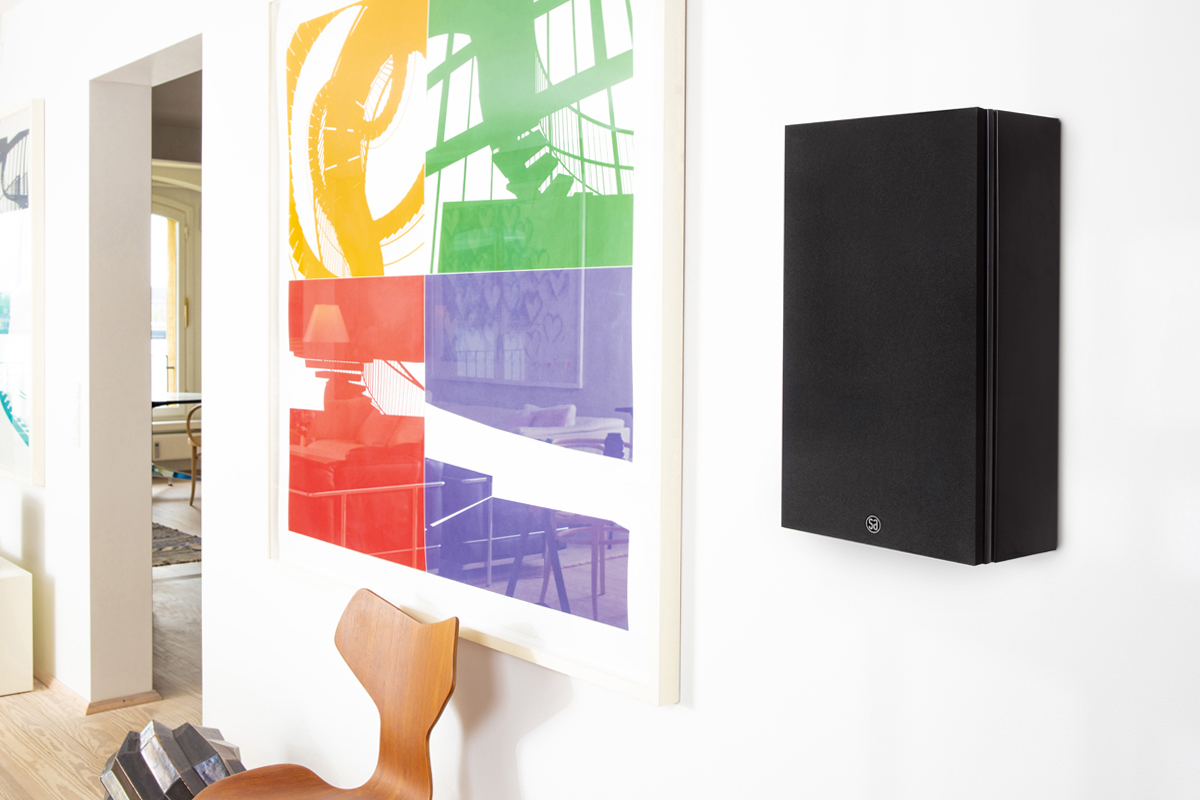 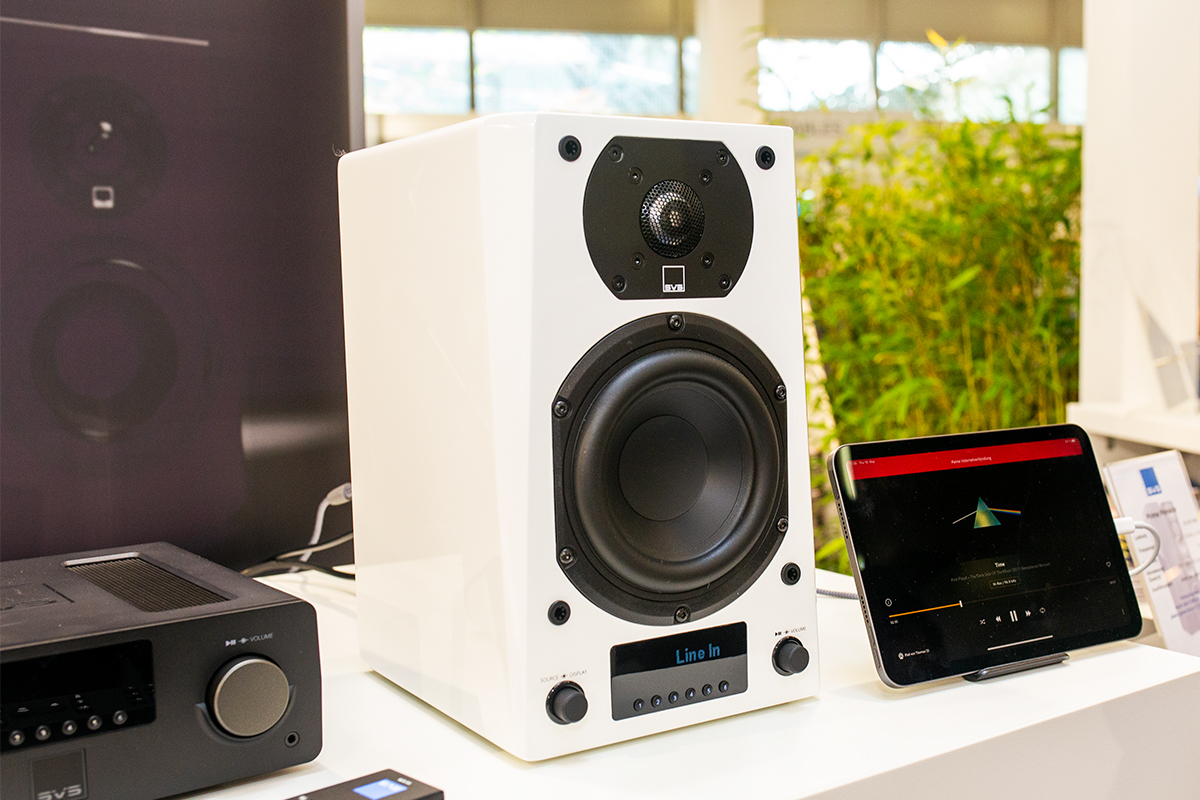 The original Prime Wireless speaker system had optical S/PDIF and analog line-level (RCA and 3.5mm) inputs. The new model adds an HDMI eARC interface. Like the original, the Pro model has Bluetooth and Wi-Fi connectivity and a streaming section based on DTS’s Play-Fi platform, which has integrated support for Tidal, Deezer, Amazon Music, Qobuz, and other services. Like its predecessor, the new Prime Wireless Pro supports Spotify Connect. But the new model adds support for Apple AirPlay 2 and Google Chromecast. This is a significant upgrade because it gives listeners more alternatives to Play-Fi.

SVS will be sending me a Prime Wireless Pro Powered Speaker Pair for review. The original system was an outstanding value, and the new version looks even more appealing. 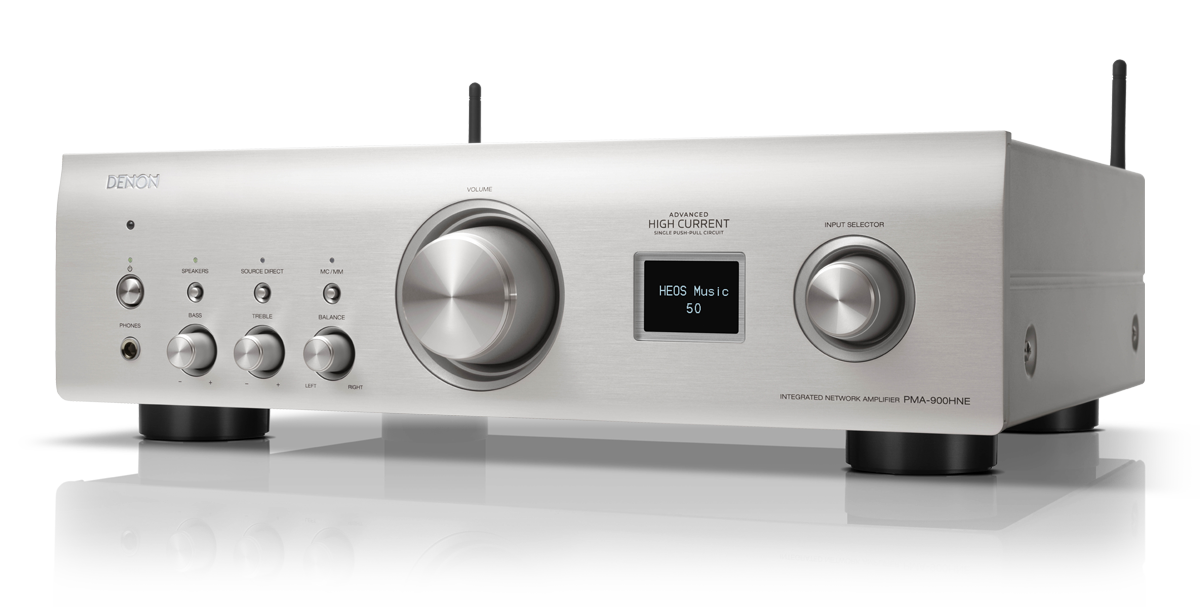 Rated continuous output of the PMA-900HNE is 50Wpc into 8 ohms or 85Wpc into 4 ohms. In addition to a phono input that can be switched for MM and MC operation, the PMA-900HNE has three sets of line-level analog inputs, one coaxial and three optical S/PDIF inputs, a USB Type-A port for connecting a drive containing audio files, and a subwoofer output with a 150Hz low-pass filter. Maximum resolutions for playback from a USB drive or streaming from the network are 24/192 PCM and DSD128. For the S/PDIF inputs, maximum resolution is 24/192.

Denon will be sending a PMA-900HNE streaming integrated amplifier to Vince Hanada for a review on Simplifi, which you can expect to see sometime this fall. 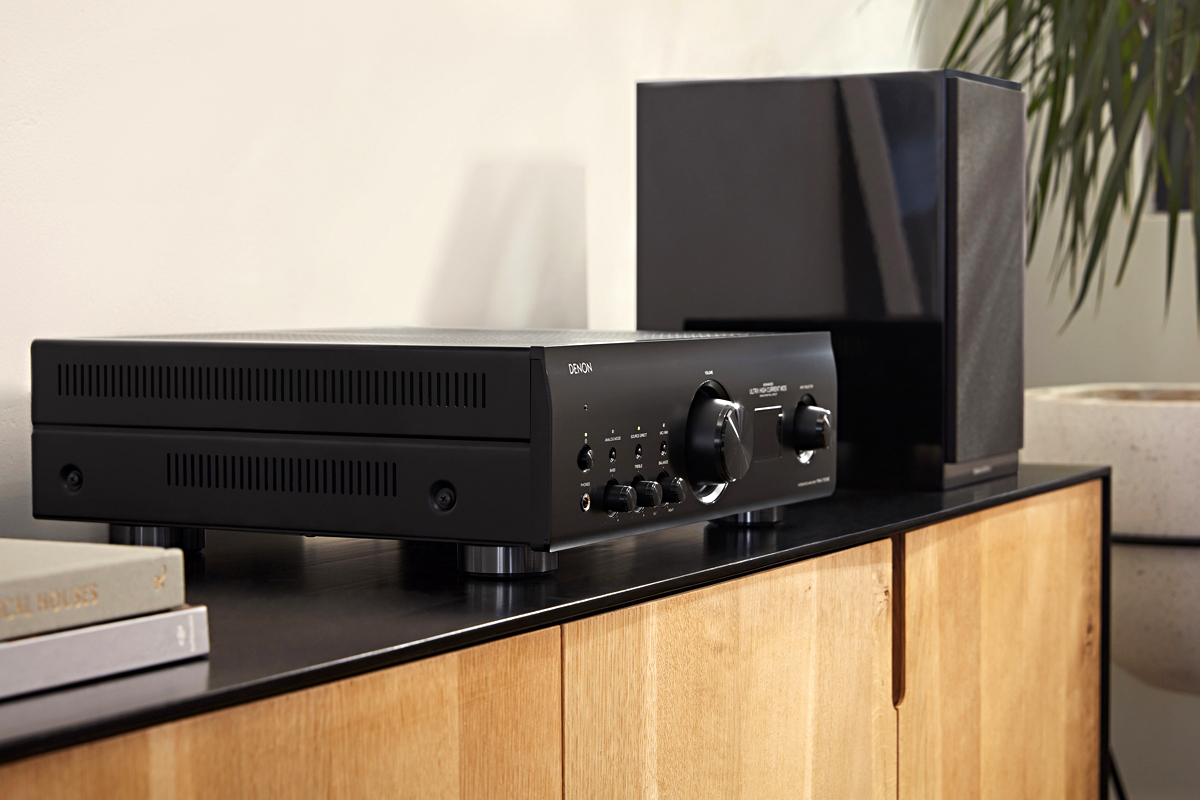 Shipping in June for $2099, the PMA-1700NE does not have network connectivity or streaming capability, but it does have a USB Type-B port for connecting a streamer or computer. Maximum resolutions of the PMA-1700NE’s USB DAC are 32/384 PCM and DSD256. The PMA-1700NE also has an MM/MC phono preamp, three sets of RCA line-level inputs, and one coaxial and two optical S/PDIF inputs. Rated continuous output is 70Wpc into 8 ohms, or 140Wpc into 4 ohms.

Dennis Burger is getting a PMA-1700NE for review on SoundStage! Access. The PMA-900HNE and PMA-1700NE are available in black or silver finishes.

NAD C 389 : Priced at $1499, the C 389 integrated amplifier-DAC slots into NAD’s Classic-series lineup below the C 399 ($1999), which Dennis reviewed in April 2022 on SoundStage! Access. The C 389 features a customized version of NAD’s HybridDigital UcD amplifier design, with multiple UcD class-D amplifier modules in a balanced, bridged configuration. Rated power is 130Wpc continuous into 8 or 4 ohms. The digital section is built around a 32/384 ESS Sabre DAC. 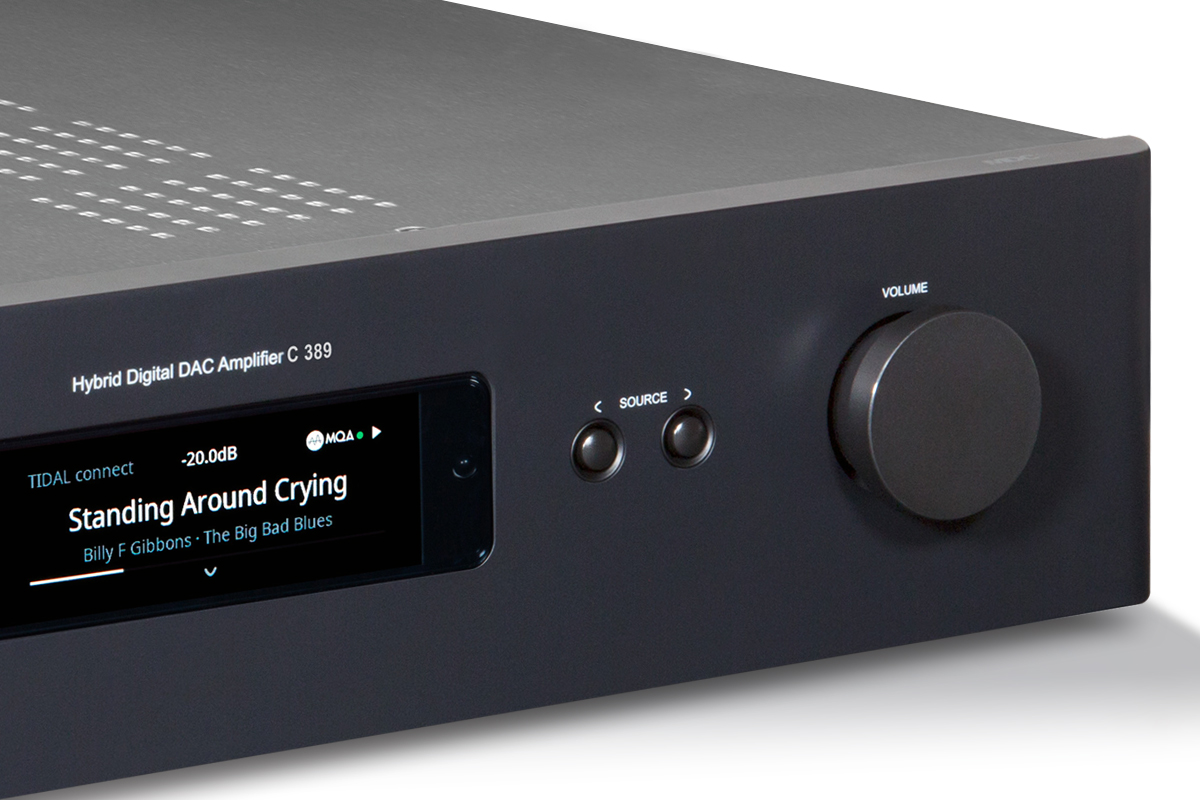 Like the C 399, the C 389 has two expansion slots that support the latest version of NAD’s Modular Design Construction futureproofing technology, MDC2. NAD’s first MDC2 module is the MDC2 BluOS-D ($549), which adds BluOS multiroom music streaming and Dirac Live room correction to MDC2-compatible components such as the C 399 and C 389.

With a MDC2 BluOS-D module installed, the C 389 can be part of a whole-home music system under control of the BluOS app. The app has integrated support for more than 20 streaming services, including several that offer lossless and hi-rez music. The MDC2 BluOS-D also supports Apple AirPlay 2, Spotify Connect, and Tidal Connect, and has MQA decoding and rendering capability.

Unlike MDC, MDC2 allows two-way communications between the expansion module and host component. With the MDC2 BluOS-D, that means that Dirac Live room correction works with all sources connected to the host amplifier. And audio from source components connected to the amplifier can be streamed to other zones in a BluOS multiroom setup.

Yamaha R-N2000A: At Munich, Yamaha previewed a new integrated amplifier that slots into its lineup two notches below the flagship A-S3200 that Roger Kanno reviewed on SoundStage! Hi-Fi in January 2021. Like the A-S3200 ($7999.95) and the less-powerful A-S2200 ($4449.95), the R-N2000A is gorgeously styled, with big front-panel output meters and aluminum controls. Like those amplifiers, the R-N2000A has a beefy power supply with a toroidal transformer, and Yamaha’s rigid Mechanical Ground construction. Rated output is 90Wpc continuous into 8 ohms. 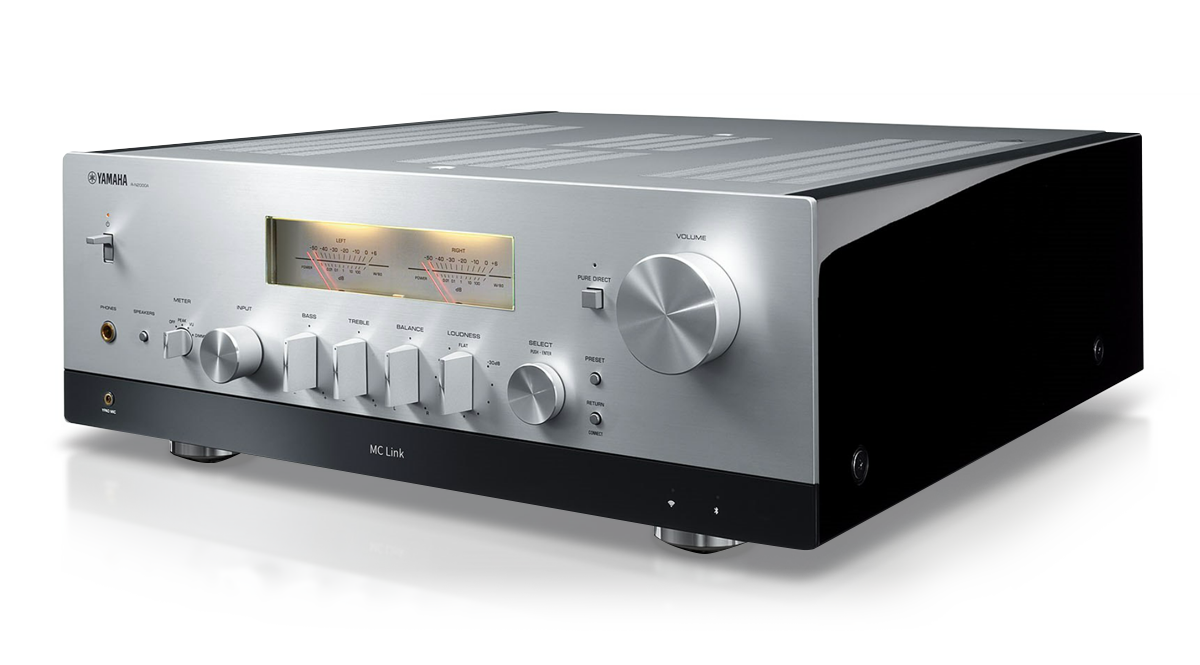 But the new amp has some features not offered on those more expensive models: notably, Wi-Fi and ethernet connectivity, and network streaming based on Yamaha’s MusicCast platform. The MusicCast app has integrated support for several streaming services, including Amazon Music, Deezer, Qobuz, and Tidal. Like other MusicCast components, the R-N2000A supports Apple AirPlay 2 and Spotify Connect.

The R-N2000A also features Yamaha’s YPAO (Yamaha Parametric Room Acoustic Optimizer) room-correction technology and has an HDMI ARC interface—capabilities that are not offered on the A-S2200 and A-S3200. Other input options include MM phono, four sets of RCA line-level inputs, two optical and coaxial S/PDIF inputs, and a USB DAC with maximum resolutions of 32/384 PCM and DSD256.

The R-N2000A is available in black or silver finishes. It will ship this fall, and price is TBA. Yamaha will be sending a sample to Roger Kanno for review on SoundStage! Hi-Fi later this year.