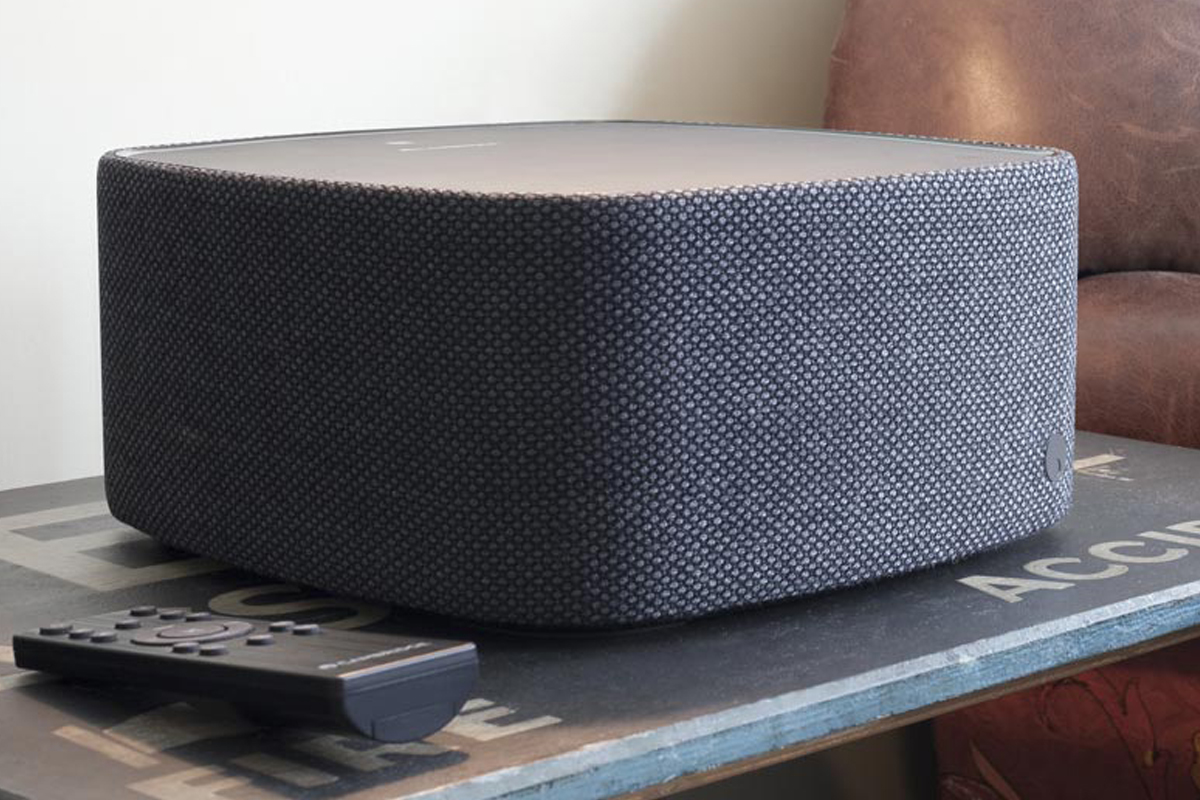 Wireless speakers have become like A/V receivers: it’s almost impossible to build one that’s still up to date a few months after launch. Cambridge Audio’s Yoyo (L) all-in-one home audio system doesn’t have voice command, the latest hot feature boasted by an increasing number of wireless speakers, but it offers almost everything else you might want in a wireless speaker, as well as at least one thing that’s likely to surprise you. It also packs a lot more audio engineering than do most wireless speakers.

The feature that might surprise you is the Yoyo (L)’s HDMI-ARC input, which lets you connect it to a TV and use it as the TV’s sound system. The Yoyo (L)’s relatively low height of 4.9” makes it practical to place the unit right in front of most larger TVs without blocking the screen. It also has TosLink optical digital and 1/8” (3.5mm) analog inputs.

The Yoyo (L) has three “full-range” drivers and three “subwoofers”: one of each on the front and both side panels. I can’t find specs for the driver sizes, but the “subwoofer” appears to be 3.5” in diameter, the “full-range” driver about 1.5” in diameter. (Now you see why I use scare quotes.) Powering these are amplifiers of unspecified output, fed by a digital signal processor running the MaxxAudio suite of audio tuning and enhancement algorithms. Other manufacturers use MaxxAudio, but Cambridge is the first I know of to promote the fact.

I think the Yolo (L) is also the first speaker I’ve seen whose maker boasts of the provenance of its grillecloth: 100% worsted wool, available in dark or light gray and woven in Yorkshire, England, by Marton Mills, a company that traces its history back to 1931. Of course, the makers of most generic $29 Bluetooth speakers can claim that their grillecloths are woven in a country that was making pretty fabrics back when the Brits were building Stonehenge.

Also included is a remote control -- another feature found with few wireless speakers. The remote accesses four EQ modes (Film, Music, TV, Voice), adjusts the level of the subwoofers, and selects the input. Other buttons on the remote and on the top of the Yoyo (L) access up to three different Spotify playlists. The Yoyo (L) can also memorize the volume up/down commands from your TV’s remote (which won’t be necessary if you use the HDMI-ARC connection).

Certainly, the Yoyo (L) promises more audio refinement than a typical ~$400 wireless speaker. Let’s find out if it delivers.

Inside the box is the Yoyo (L) itself, its power cord, the remote control, and a quick-start guide.

At 10.6” square by 4.9” high, the Yoyo (L) fits easily on most shelves. It may be too tall to sit below some TV screens, though -- its top just barely stuck up in front of my screen. 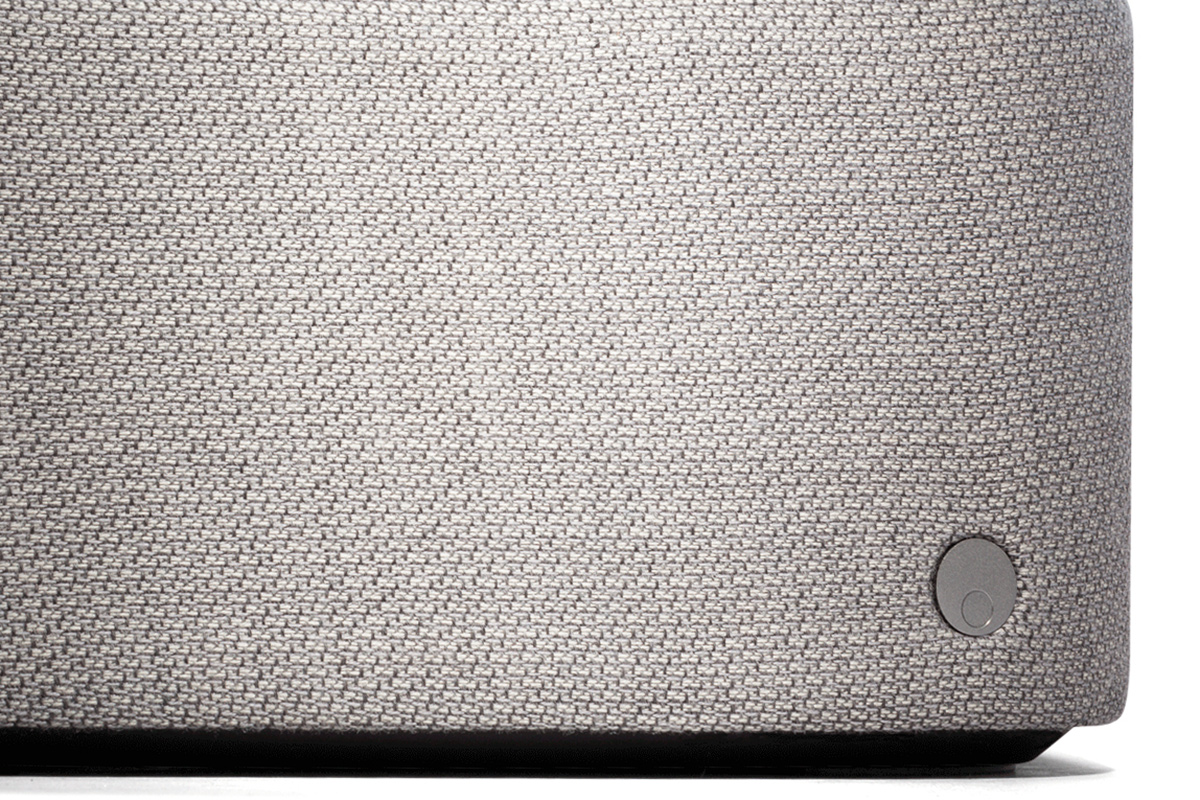 The HDMI, TosLink, and analog inputs are in a recess in the bottom panel, which allows them to be gracefully snaked out at the bottom of the rear panel. I tried connecting the Yoyo (L) to the HDMI-ARC jack of my Samsung UN46C8000XF 46” LCD TV, using as sources a Samsung BD-C6500 Blu-ray player and my TV’s internal DTV tuner. But while the Yoyo (L) and the TV were clearly talking to each other -- “Yoyo (L)” appeared on the screen, and both the TV and the Cambridge seemed to respond to the volume controls on the TV’s remote -- I was never able to get the TV’s sound out of the Yoyo (L), even though I’ve gotten this sort of connection to work with various soundbars. After about 40 minutes of messing with the settings in my BD player and TV, I gave up and used a TosLink connection from the player to the Yoyo (L). That worked fine.

I’m torn about the remote, which is needed to access the EQ modes and adjust the subwoofer level, both of which you’ll probably want to do at times. I’ve gotten used to working Wi-Fi speakers through apps; having to grab the remote is easier in some ways (don’t have to start the app or fumble through it), harder in others (have to go looking for the remote).

My first impression of the Cambridge Audio Yoyo (L) was that it had a full sound with ample bass for so small a device. With most music, I had to turn the sub down a notch or two.

Listening in Music mode to “What’s New?,” from Frank Sinatra’s Only the Lonely (320kbps Ogg Vorbis, Capitol/Spotify), I liked the sense of spaciousness the Yoyo (L) gave me. It wasn’t anything like the soundstage from a real stereo system -- it was more like what’s sometimes called “fat mono” -- but I definitely got a more ambient sound than I get from most wireless speakers. The orchestra sounded full and, at least for an all-in-one wireless speaker, enveloping. Sinatra’s voice wasn’t as prominent in the mix as I usually hear, though -- the mids seemed somewhat muted, the highs slightly soft. 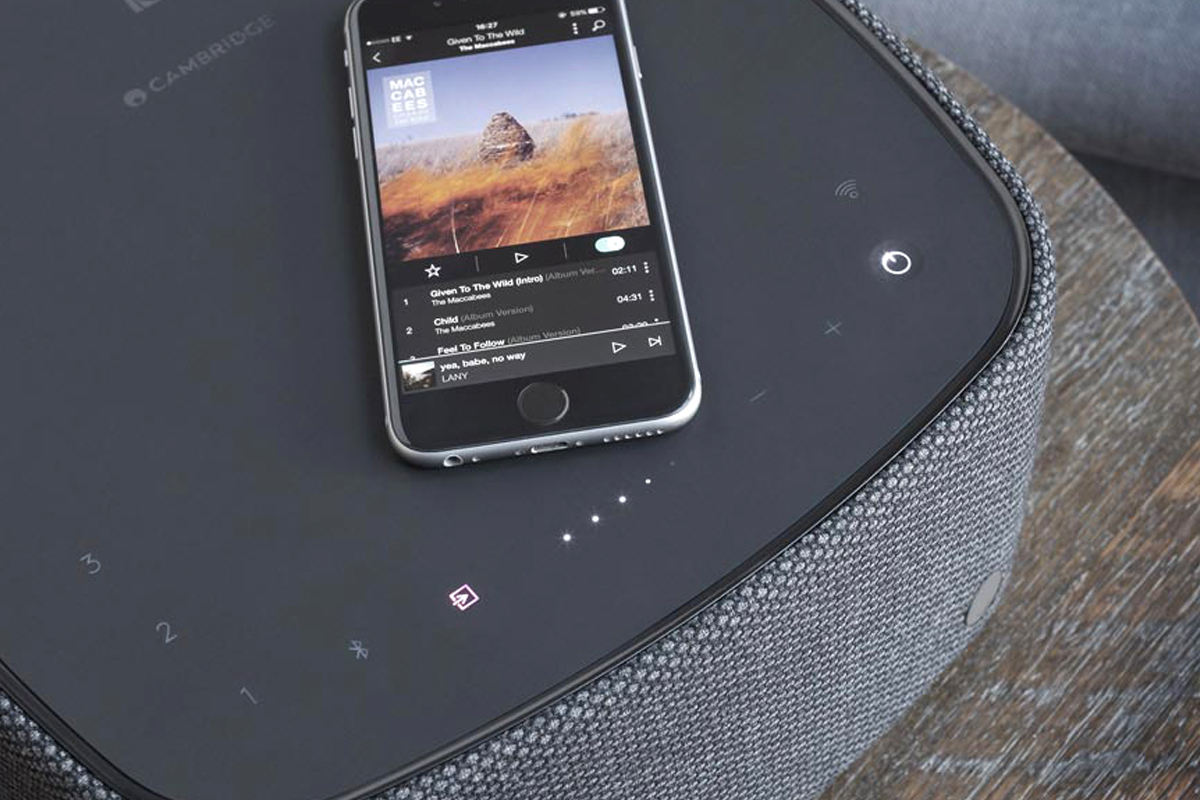 I heard much the same effect with “Good Time Charlie’s Got the Blues,” from Holly Cole’s Night (320kbps Ogg Vorbis, Tradition & Moderne/Spotify). The deep double-bass notes that begin this track had a nice sense of fullness and groove without distortion, but again, Cole’s voice sounded a bit buried in the mix, and a little soft in the upper frequencies. Out of curiosity, I tried the Yoyo (L)’s Voice mode -- while that brought out her voice more, it seemed to reduce everything but the midrange, which sounded unnatural and took the groove out of the music.

Wanting to hear how the Yoyo (L) sounded with something a little less vocal-centric, I played “Dumb Disco Ideas,” by the synth-pop duo Holy Ghost! (single, 256kbps MP3, AN FM). Again, the voices sounded deemphasized, though I loved the illusion of space the Yoyo (L) created -- for example, what appeared to be a sample of a small cowbell rang out from far to the speaker’s left. 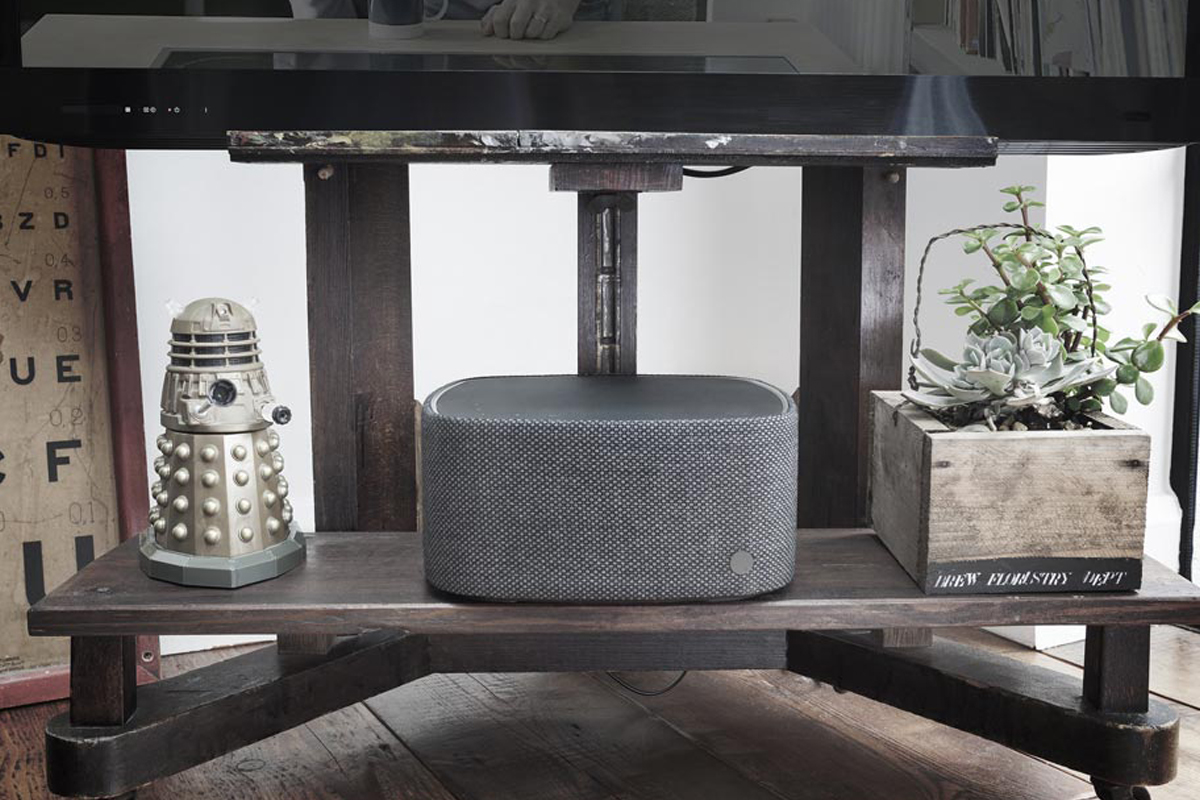 When I played the film Unbroken (BD, Universal) through the Yoyo (L) in Film mode, the sound was definitely fuller than my TV’s speakers, voices sounding clearer and more natural. It also had sort of a quasi-surround effect, almost as if there were a center speaker and no left and right front speakers, but two surround speakers turned down about 8dB each. However, at least when connected via TosLink, the Yoyo (L) didn’t play very loud -- just a bit louder than my TV’s speakers, and nowhere near as loud as most soundbars I’ve tried. The Yoyo (L) has the sonic horsepower to play louder, but I think the relatively low level of the sound from the BD (which goes through a dialog-normalization process that has the effect of bringing the overall level down) isn’t able to exploit this. It really needs some sort of level booster to compensate for this.

I didn’t have a Wi-Fi speaker in the $400 range handy when I tested the Yoyo (L), so I compared it with a Marshall Stanmore Bluetooth speaker. As the Wi-Fi version of the Stanmore currently goes for $349 on Amazon, and the two models have similar feature sets (Bluetooth, Chromecast, Spotify Connect), I thought the comparison was fair.

With all tunes mentioned above, the Stanmore’s balance was more even, voices assuming their proper level of prominence, and the entire range of sound was clearer and more natural. The Stanmore is more monophonic -- it uses a single 5.25” driver to reproduce everything up to 2500Hz -- but the tendency of the Yoyo (L) to bury the midrange made the Stanmore win out with all the music I played. 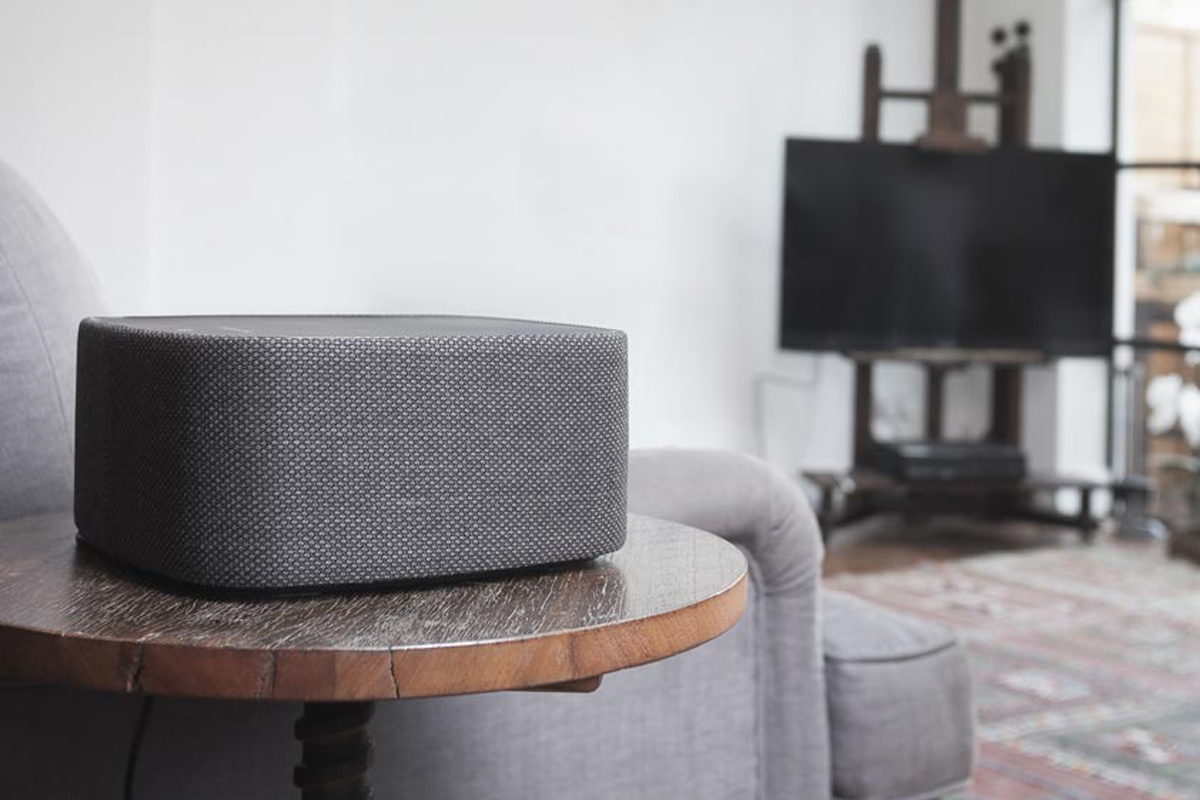 Granted, the Yoyo (L) is better than many wireless speakers I’ve heard -- my living room currently hosts eight Bluetooth speakers of roughly similar size, including the Marshall Stanmore -- but I don’t consider it competitive with my favorites in the category.

In terms of industrial design, the Yoyo (L) is very appealing. In terms of features, it’s a knockout, and a few steps ahead of most of its competitors (as long as you’re not interested in voice command). But in my opinion, its sound quality, while pretty good and generally enjoyable, isn’t competitive with the best wireless speakers in these ranges of price and size.