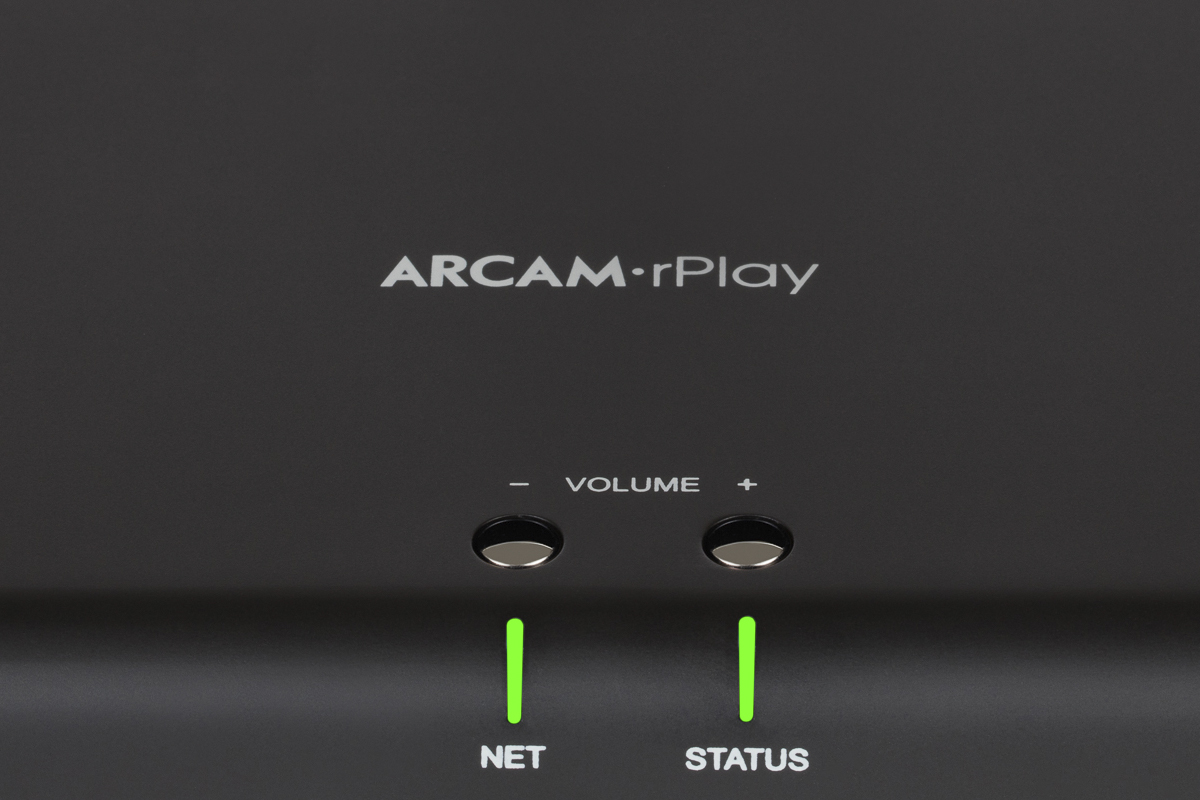 In the past year I’ve reviewed an array of all-in-one products, ranging from wireless powered speakers to integrated models combining streamer, DAC, preamp, and amp functions in a single case. A related category that I’ve ignored completely is the network audio player, a group that includes Arcam’s new rPlay ($599 USD).

Network audio players are standalone devices designed to add Internet audio and DLNA/UPnP streaming capabilities to an existing system. A number of such players are made by companies ranging from Marantz to McIntosh. And while the features and build quality these offer can be impressive, many are also component-size beasts that add bulk and complexity to a system, and some are also downright expensive. Two grand just to add streaming? Thanks, but no.

The rPlay is part of Arcam’s rSeries line of audio accessories, which also includes a phono preamp, USB DAC, and Bluetooth streamer. Using the DTS Play-Fi and Apple AirPlay platforms, it adds network connectivity to a preamp or integrated amp. The rPlay’s UPnP feature is compatible with a wide range of media servers, and its support of 802.11b/g/n is supplemented by wired Ethernet. 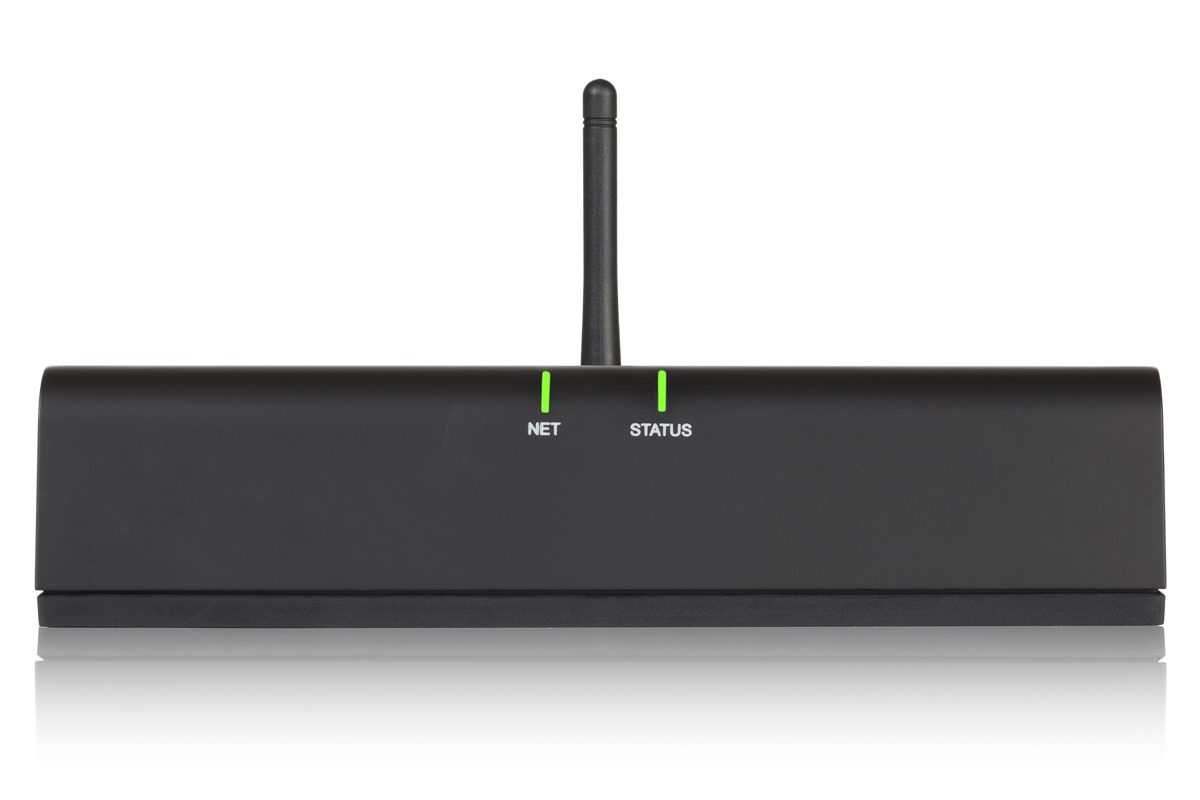 Aside from that, there’s not too much more to say about the rPlay. You connect it to your network and control it using the Play-Fi app, which provides integration with Tidal, Spotify, Pandora, Amazon Music, Deezer, Qobuz, and a handful of other services. Used in a multiroom configuration with up to eight separate rPlay or other Play-Fi-compatible devices, it can stream uncompressed audio with up to 16-bit/48kHz resolution. Enabling the Critical Listening mode in Play-Fi boosts that to 24/192, but streaming is then limited to one device at a time; in that situation, Arcam suggests that you use wired Ethernet, not Wi-Fi.

While many compact devices designed to add a specific function to a system can look cheap and feel cheesy (e.g., media streamers made by Roku and its competitors), the rPlay is, in comparison, extraordinarily well built. About the size of a mass-market paperback, it has a sturdy, all-metal case that slopes down gently in front, with buttons to adjust or mute the volume when the analog outputs are active. The rPlay’s bottom surface is made of a rubberized material to prevent it from scratching or sliding off the top of a preamp or integrated amp -- a likely place for the rPlay in most systems. 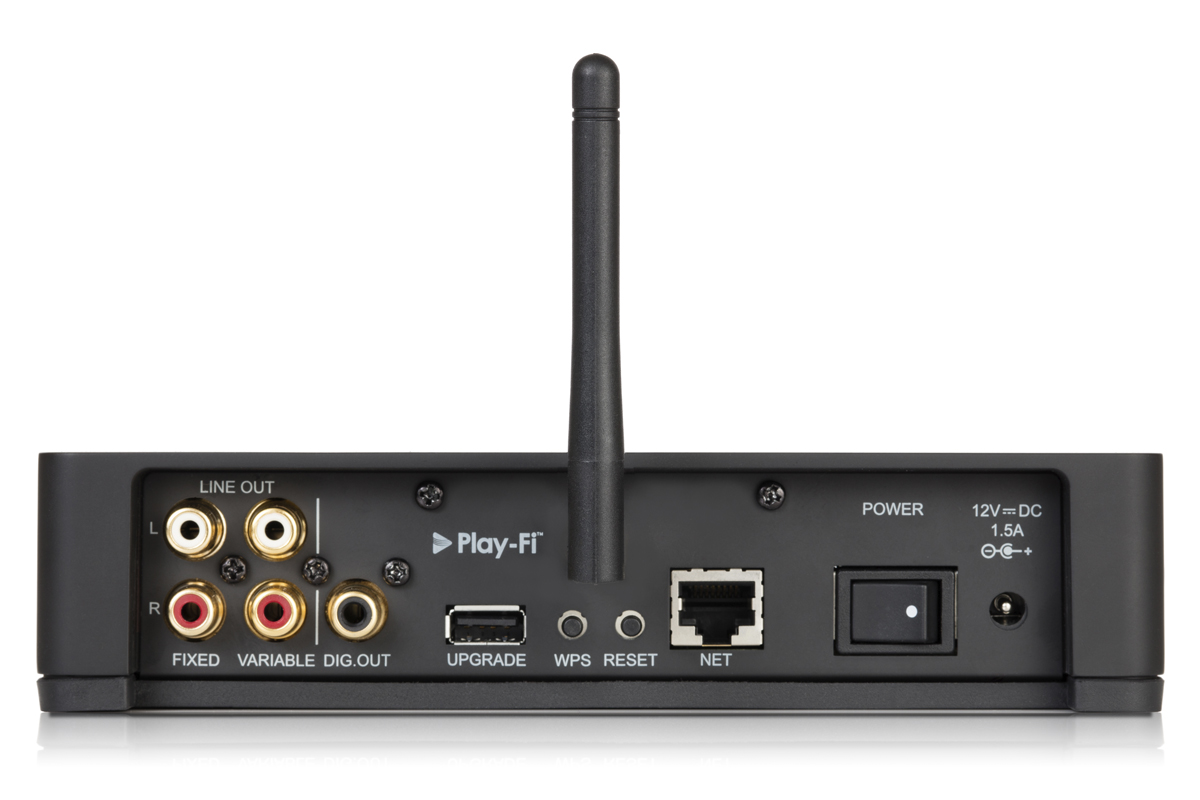 Connections on the rPlay’s rear panel are limited to coaxial digital and fixed and variable RCA analog outputs. It also has a LAN connector, a screw terminal for its Wi-Fi antenna, a USB port (for software upgrades only), small buttons for system resets and WPS pairing, and a rocker Power switch. The rPlay comes with an outboard 12V power supply.

In previous outings with Play-Fi products, including McIntosh’s RS100 Wi-Fi loudspeakers, I’ve found setup a drag: pairing with my wireless network required numerous attempts, and inevitably ended in my placing the device within a few feet of my router. I would then have to unplug and return the device to the desired spot and hope the connection would hold.

No such problems when I installed the rPlay in my audio rack, which is on a different floor of the house from my wireless router. The difference with the rPlay might have something to do with Play-Fi -- since I checked out the McIntosh RS100, DTS has updated the app five times. A recent upgrade of router to a Netgear Orbi, which I bought to ensure dependable wireless streaming of 4K-resolution video from Netflix, could also be a factor. 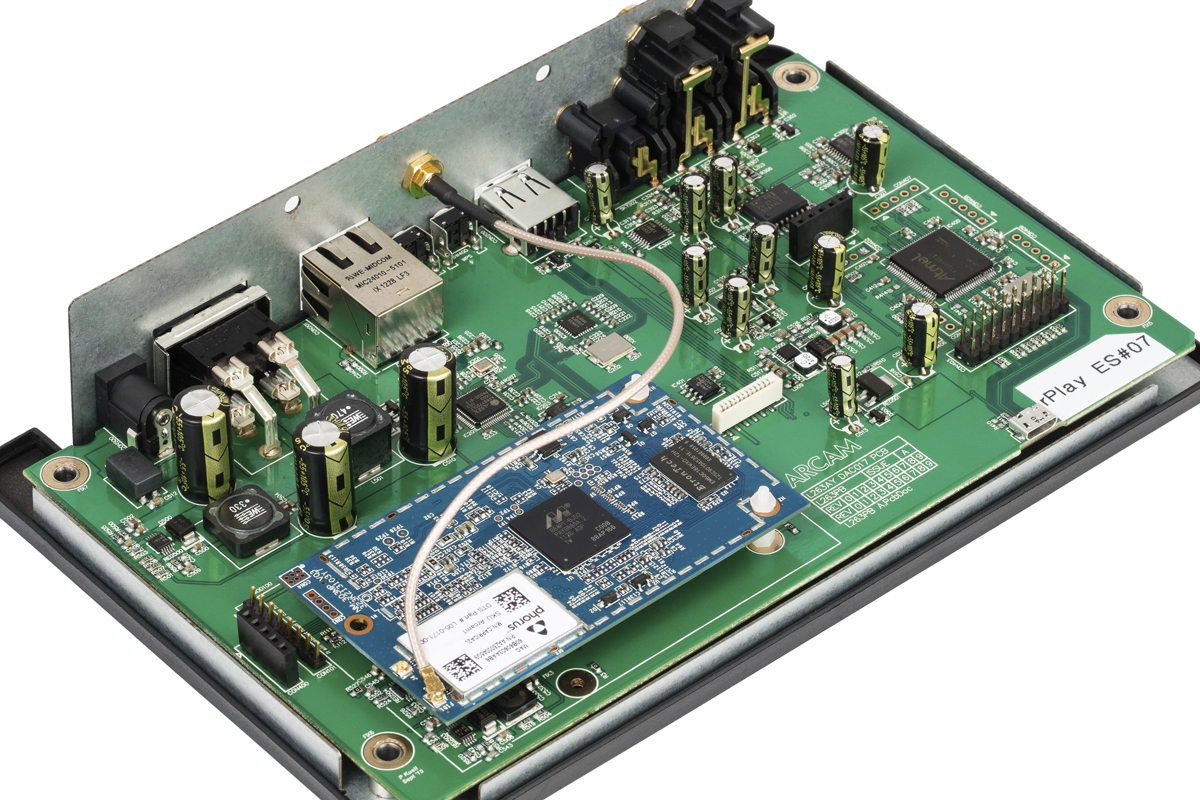 While the rPlay’s Wi-Fi connectivity proved robust, I made a point of using a wired Ethernet connection for my installation, just to guarantee that there would be no dropouts or other problems. I connected the rPlay to a Hegel Music Systems Röst integrated amp, using both the Arcam’s variable analog and coaxial digital audio outputs. I also used the Play-Fi app for connecting a Polk Audio Omni S2 Wi-Fi speaker in another room, to verify Play-Fi’s multiroom capability.

The Play-Fi app may have undergone numerous updates since the last time I played with it, but to me it looked the same. Once configured, a Connect panel lets you select one or more “speakers” for playback. There’s also a hi-rez audio icon that, when pressed, gives you the option to stream files with up to 24/192 resolution to a single speaker. When you’ve selected your speakers, a Music panel displays any services you’ve signed into (my list: Tidal, Spotify, and Pandora, along with Internet Radio and Media Server options). There’s nothing fancy about the Play-Fi app, but it works, and for the most part is easy to navigate. Using MinimServer as my media server, the app was able to rapidly scan files on my MacBook Pro when browsing, with only a short delay between my selecting a track and hearing it begin to play.

I began my listening by streaming the title track of Kevin Morby’s new release, City Music (16-bit/44.1kHz FLAC, Dead Oceans/Tidal). With the rPlay feeding the Hegel Röst integrated amp via the Arcam’s variable analog outputs, the sound was impressively wide, with solid-sounding drums and clear, upfront voices that had a good sense of body. The guitar interplay was crisp and upfront without being edgy. Overall, the rPlay’s sound was slightly on the mellow side, with a notable sense of spaciousness and dynamic ease. 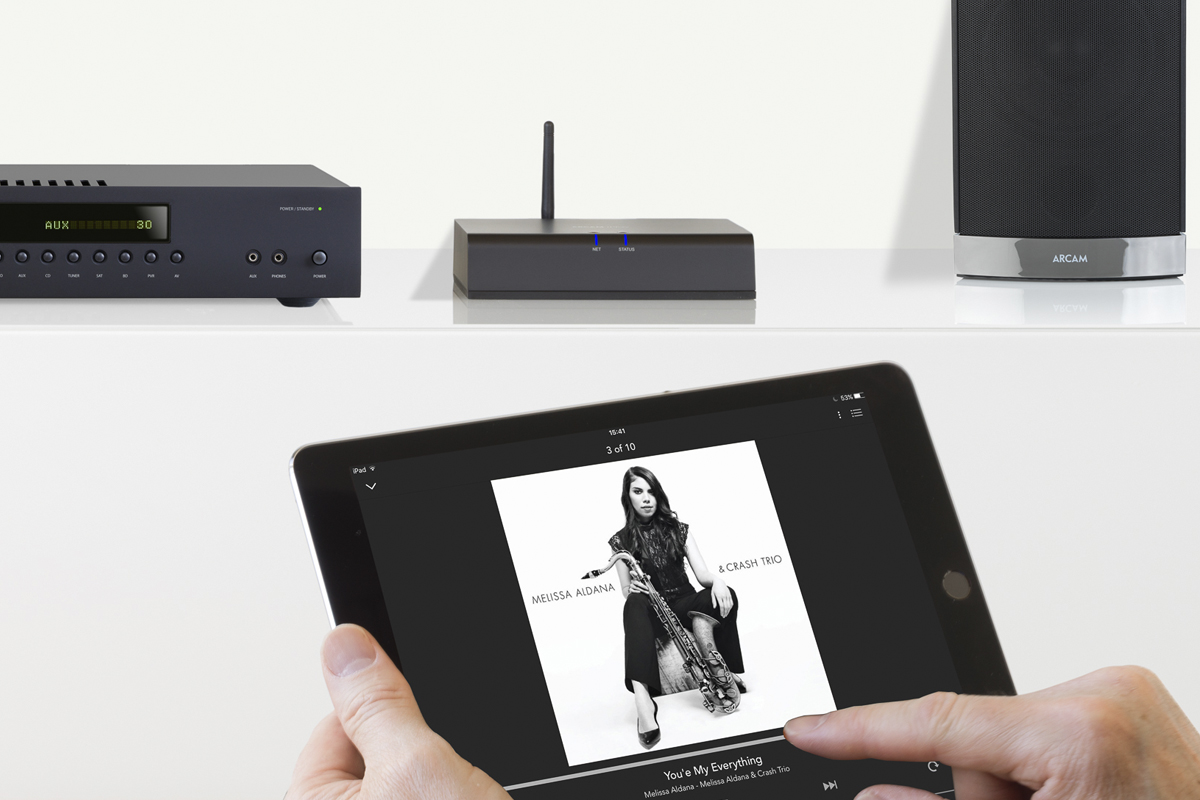 Sticking with jazz (well, sorta), I next listened to “Groundswell,” from Towards Language, by Norwegian trumpeter Arve Henriksen (16/44.1 FLAC, Rune Grammofon/Tidal). It sounded similarly expansive through the rPlay, with a full, almost bottomless quality to the bass. The Arcam also did an excellent job of rendering the tension between Henriksen’s taut, highly textured playing and the mostly ambient background.

Switching to Play-Fi’s Critical Listening mode and hi-rez playback, I streamed a download of Steely Dan’s “Hey Nineteen” (24/96 FLAC, MCA/HDtracks) from my MacBook Pro. The rPlay easily delivered the crisp, studio-perfect sound I’m used to hearing from this track: drums and bass came across as dynamic and detailed, while the keyboard and voices had richness and depth. An even higher-rez download, of Miles Davis’s “So What,” (24/192 FLAC, MCA/HDtracks), also had striking detail, along with a compelling sense of the space surrounding the trumpet, alto and tenor saxophones, piano, bass, and drums.

When I switched to the Hegel Röst’s DAC, I heard differences, though they weren’t as dramatic as I’d expected. The bass guitar in Morby’s “City Music” sounded a bit more extended with the Hegel handling decoding, and the dual guitars had more shimmer. The impressive bass I’d heard from Henriksen’s “Groundswell” was now even more powerful, and Scofield’s guitar in “Woodstock” was slightly crisper. Overall, the Röst edged out the rPlay’s DAC in clarity and dynamics, though the Arcam definitely held up its end. 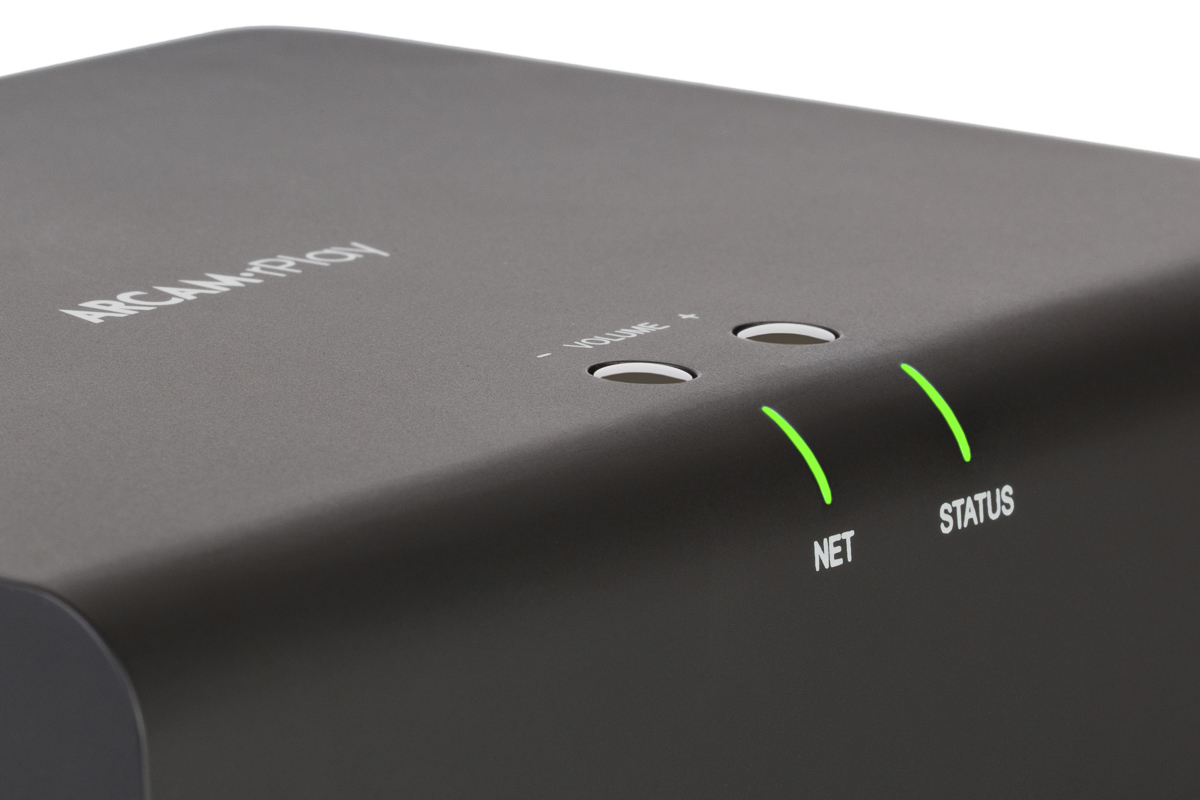 Though comparisons between the rPlay and Hegel DACs are legit in the context of a review such as this, I found it more interesting to compare the rPlay’s sound with that of another standalone streamer I had on hand: Google’s Chromecast Audio ($30). As I listened to my Tidal playlist through both, the soundstage of the Morby track was notably more constrained with the Chromecast, and guitars and vocals sounded comparatively gritty. Same thing with Mazzy Star’s “California” (16/44.1 FLAC, Rhymes of an Hour/Tidal), which I regularly use to test DACs: David Roback’s open-strummed acoustic guitar sounded flat and constrained through the Chromecast; through the rPlay, it was notably more spacious, open, and detailed.

The Arcam rPlay is a great option for someone looking to add network streaming to an audio system. It offers excellent build quality and great sound quality, and it’s small enough to fit easily and unobtrusively into your existing system. The Play-Fi app that powers it has come a long way in the past few months, and now seems a thoroughly reliable platform for multiroom streaming of high-resolution audio. At $599, the rPlay costs 20 times as much as Google’s puck-like Chromecast Audio -- but when you use the Arcam to listen to Tidal or Spotify, or stream music from a media server on your computer or NAS, your ears will tell you that the difference is worth the money.