Vinyl: There's an App for That 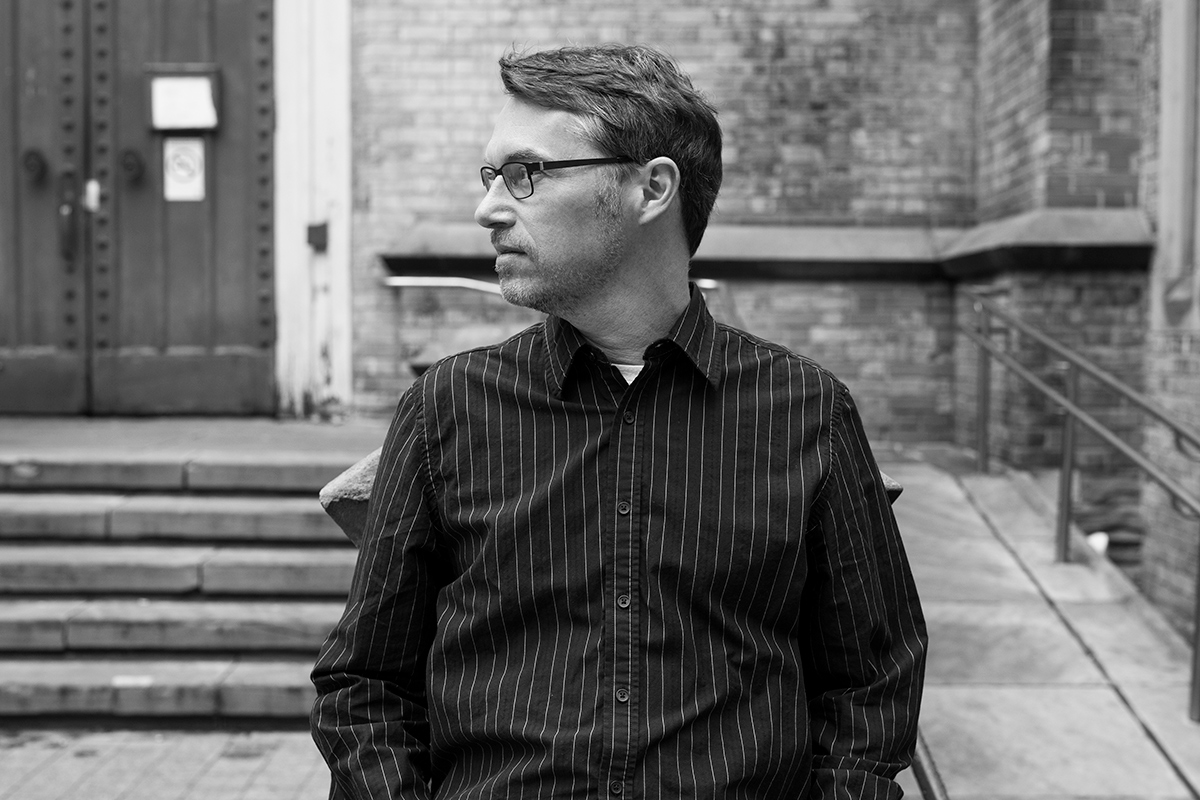 Each of the seven vices can be committed by the record collector -- even sloth, which is the sin of not taking proper care of your LPs, or of failing to file them correctly. But the vice I’ve come to most closely associate with collecting vinyl is greed.

How did it happen? A few months back, I was visiting a friend who is something of an LP-collecting pro. Not only does he know about things like labels, versions, and value, he can unearth rarities like a pig sniffing out truffles. Our wanderings that day included stops at -- big surprise -- several antique stores and used-record shops, where my friend amassed a pile of obscure blues and funk, along with mono versions of a few albums of 1960s classic rock. 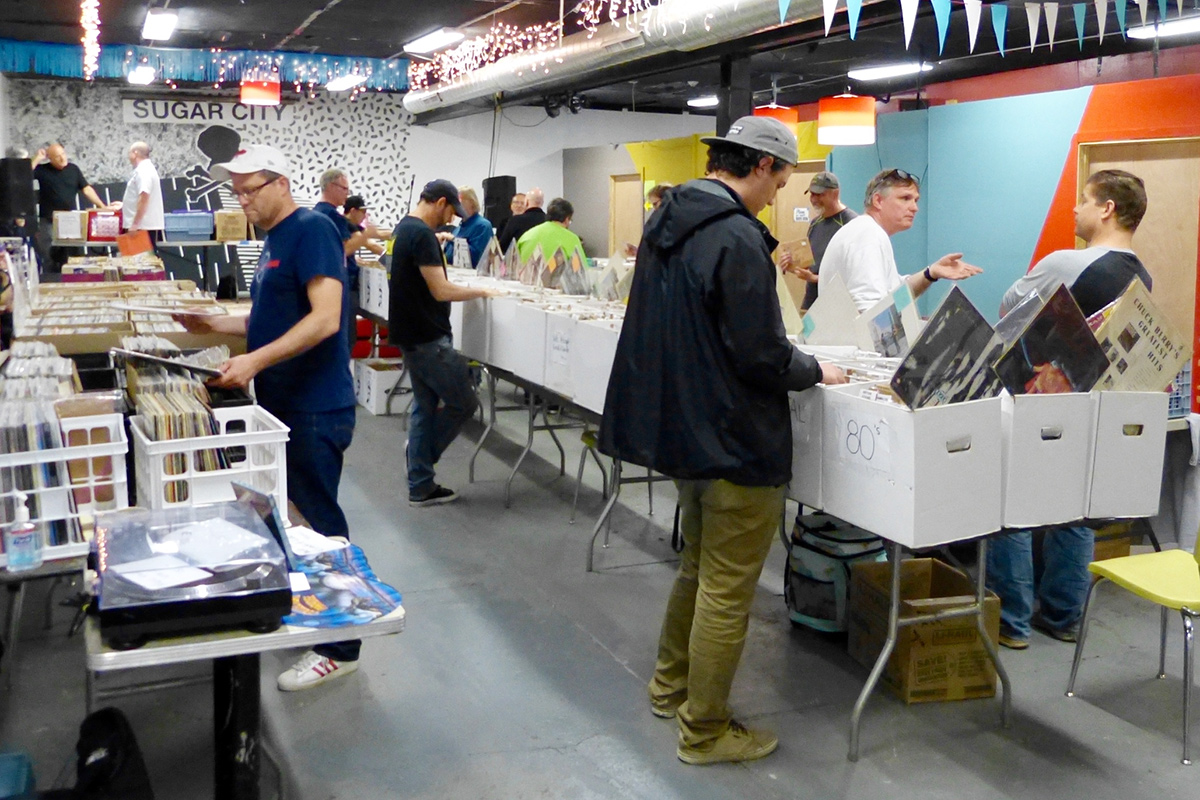 Watching him rifle through the stacks, I noticed that he kept pulling out his phone and consulting an app. “What’s that?”

“Discogs,” he replied. “Record-collecting app. You enter the release code from the spine and it shows you the value.” My ears pricked up. A few minutes later, I’d downloaded Discogs to my phone and was using it to assess the value of the vinyl I was digging through.

Discogs provides a detailed release database for LPs, EPs, 7” singles, CDs, and cassettes, and it lets you catalog your collection by adding listings to a personal profile. The app indicates minimum, maximum, and median values for each listing, and it also displays a cumulative Collection Value so you can gauge your vinyl wealth. Prying, I asked, “What’s your Collection Value?” 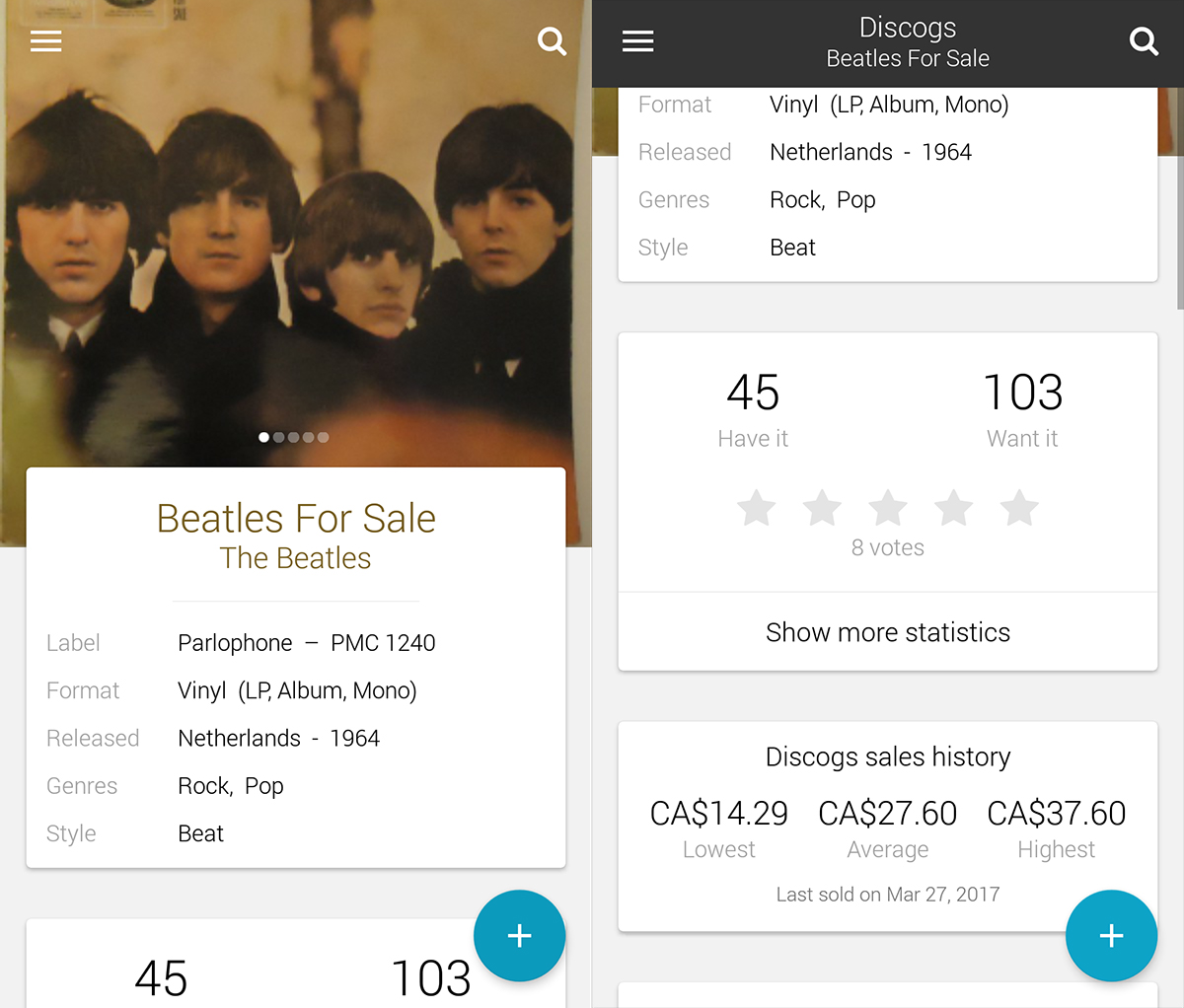 One app I’ve used regularly over the past few years is Robinhood, which lets you buy and sell stocks on your phone for free -- there are no commissions or fees. When it comes to stock trading, I’m a moron: My Robinhood account consists mainly of tech stocks, many of which I bought high and then watched with dismay as their value plummeted (hello, TWTR and GPRO). Fortunately, after downloading Robinhood, I decided that I’d treat it like a Vegas vacation: take a fixed sum that it would be okay to lose, and after that, no additional trips to the casino ATM. So far, it’s mostly worked out, and my portfolio has even inched into the green.

Discogs has joined Robinhood as one of my go-to apps, and I approach it with the same heady mix of compulsion and greed. I recently had a chance to try it out at a local record fair, where I and other middle-aged dudes, along with a handful of women and millennials, competed for browsing space among the rows of bin-laden tables. Of course, there’s a big difference between a record fair and a garage sale: the dealers at fairs usually know the value of what they’re selling, and price it accordingly. No Beatles butcher cover for 50¢ here. Still, I was motivated to try my luck.

After rounding up some LPs I wanted and finding out via Discogs that the dealers had priced them at full market value, I began to get discouraged. I wanted a score! Eventually, I came across an album I’d discovered after reading about it in Pitchfork’s list of "The 50 Best Ambient Albums of All Time" and had enjoyed listening to on Apple Music: Structures from Silence, by Steve Roach. Pulling out my phone, I learned that the LP’s median value was four times the dealer’s asking price. It was also in mint condition. Ka-ching! Thanks, Discogs. 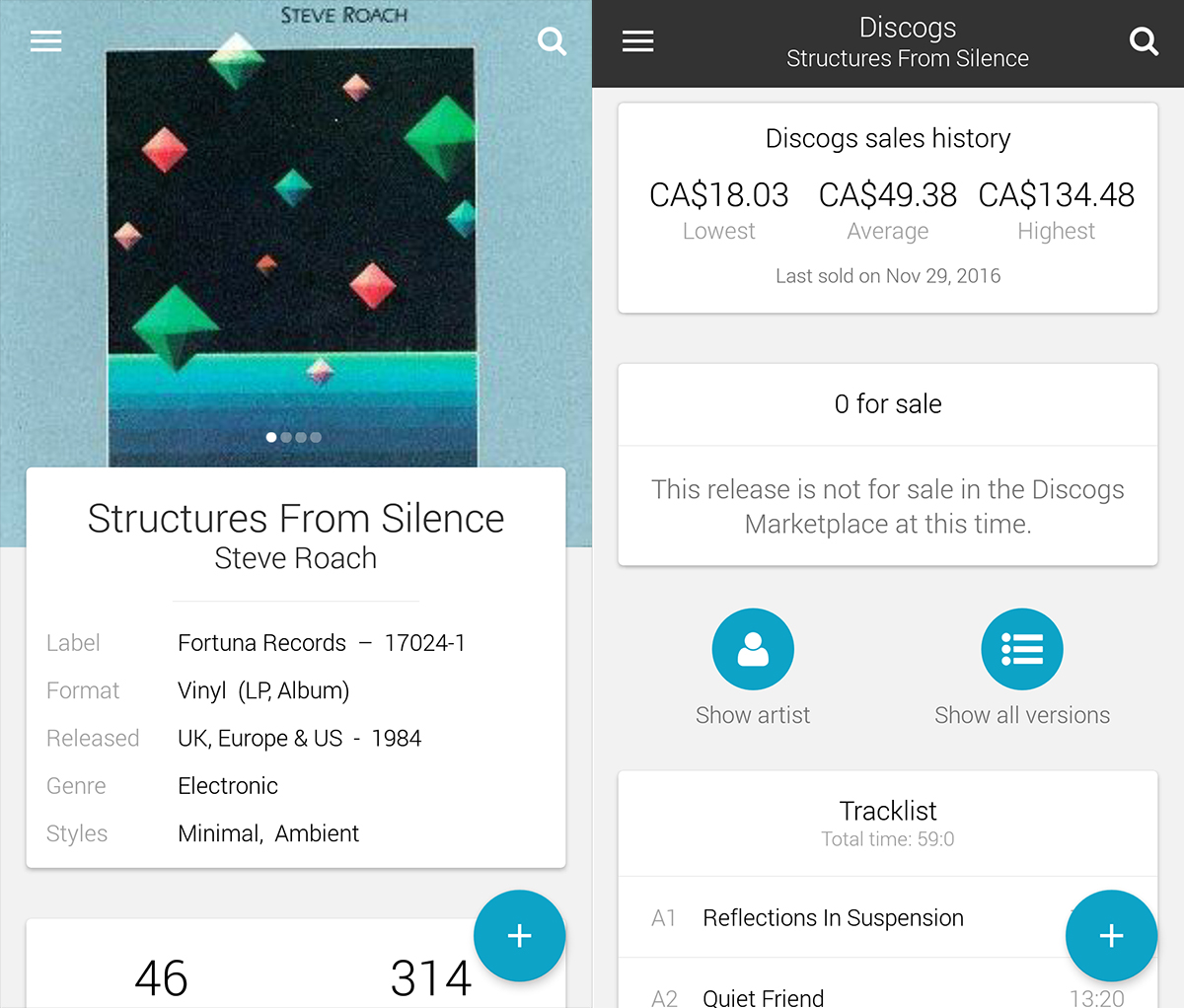 What else can you find on Discogs? Since the database is user-generated, you get the opportunity to give back to the community by adding version data for specific releases. It also has a marketplace where you can buy and sell LPs, CDs, DVDs, and cassettes. Along with creating a personal collection, you can create a wish list, and Discogs will alert you when items on your list come up for sale. Your wish list is also a convenient resource to consult when out shopping for LPs. Finally, Discogs is both a blog and an active music-discussion forum with a huge subset of groups you can subscribe to. In short, Discogs is a one-stop destination for serious music collectors and fans.

Oh yeah, almost forgot: Discogs has a new sister site, Gearogs, with a focus on pro-audio and hi-fi gear. At present, it’s mainly a database with thousands of listings for everything from turntables and speakers to vintage synthesizers, but Discogs’ stated aim for the site is to add many of the same features found on the music app. 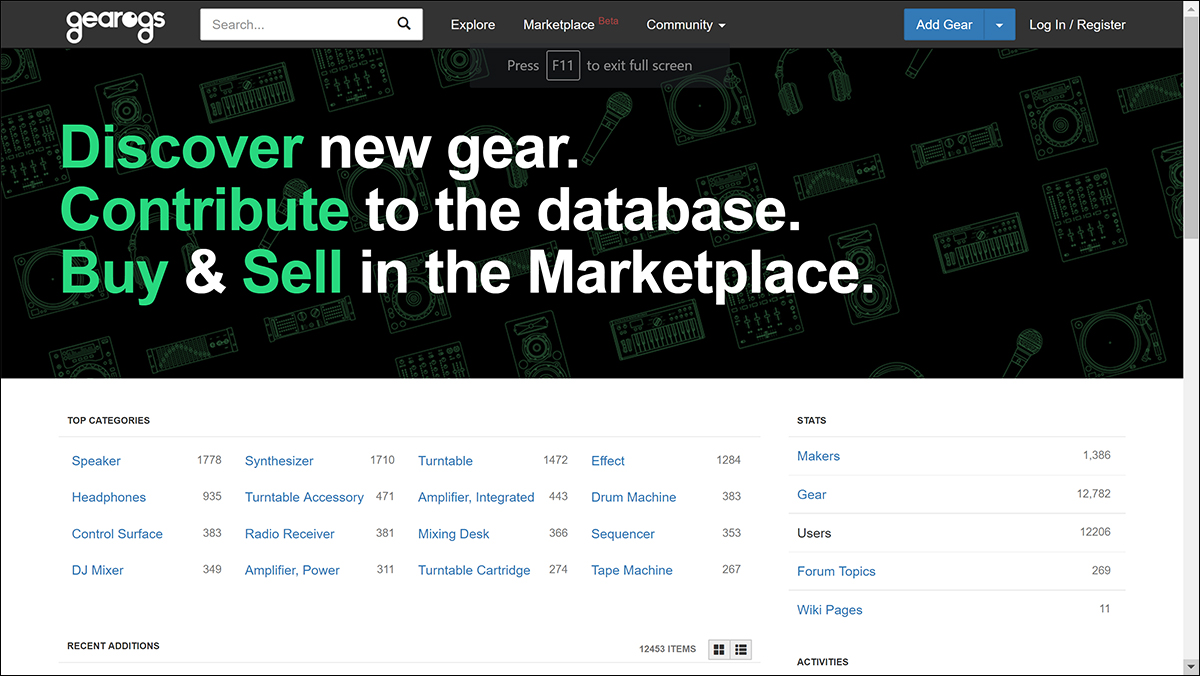 Most investments come with a degree of volatility and risk. Vinyl, on the other hand, is not only fun to collect, it’s a sure financial bet -- the value of the investment will go only up. There’s gold in them thar bins. Get out there and dig for it.