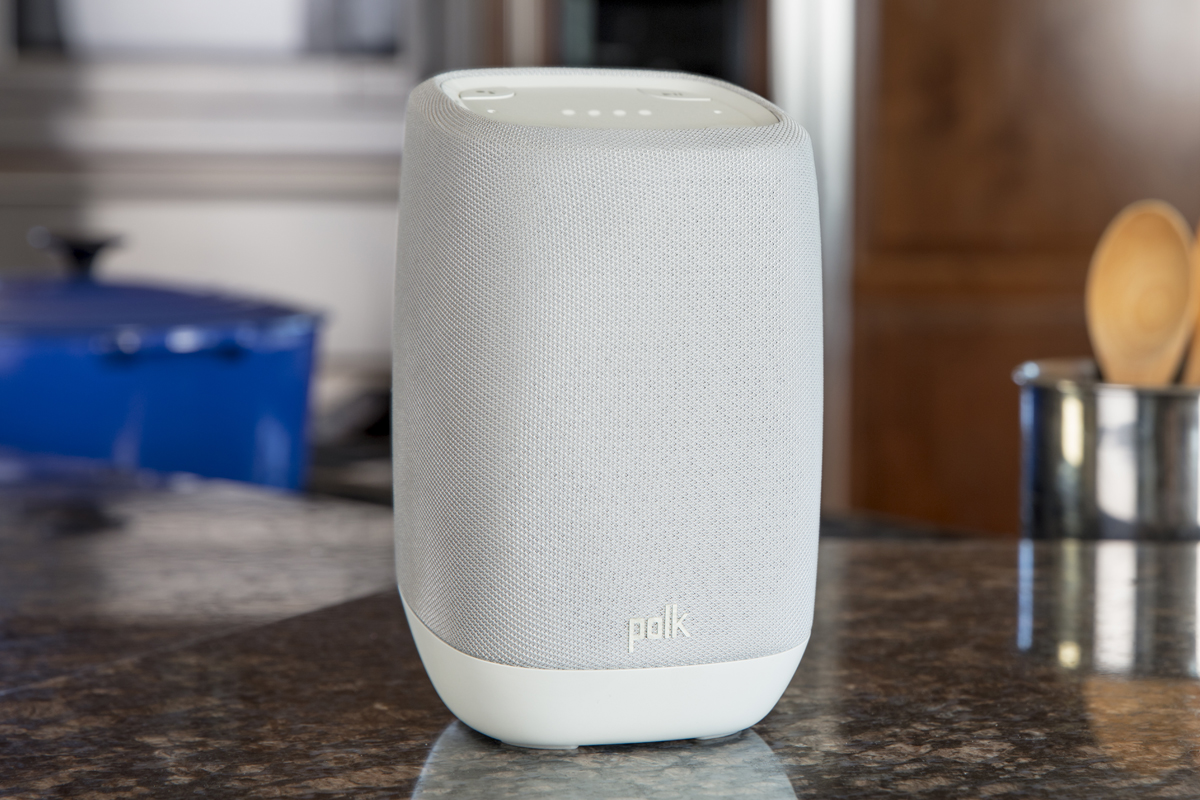 While many audio writers have questioned the desirability of smart speakers, the general public seems to have no such reservations. Estimates project that more than 80 million of these voice-controlled products will have been sold worldwide by the end of 2018. The market’s been dominated by Amazon and Google, but neither of those brands is synonymous with good sound. Fortunately, mainstream audio companies are now incorporating voice-command technology from Amazon or Google into their speakers. The Polk Assist ($199.95 USD), which includes Google Assistant, is one of the first of this wave.

The 7.5”-high, 4.7”-square Assist is built much the same way Polk would likely build a compact desktop speaker: with a 1” dome tweeter, a 3.5” woofer, and 40W of amplification. There’s no reason it shouldn’t sound pretty good -- especially considering that, like almost all wireless speakers, the Assist’s internal digital signal processor has allowed its designers to tune it much more precisely than would be possible with a passive speaker. 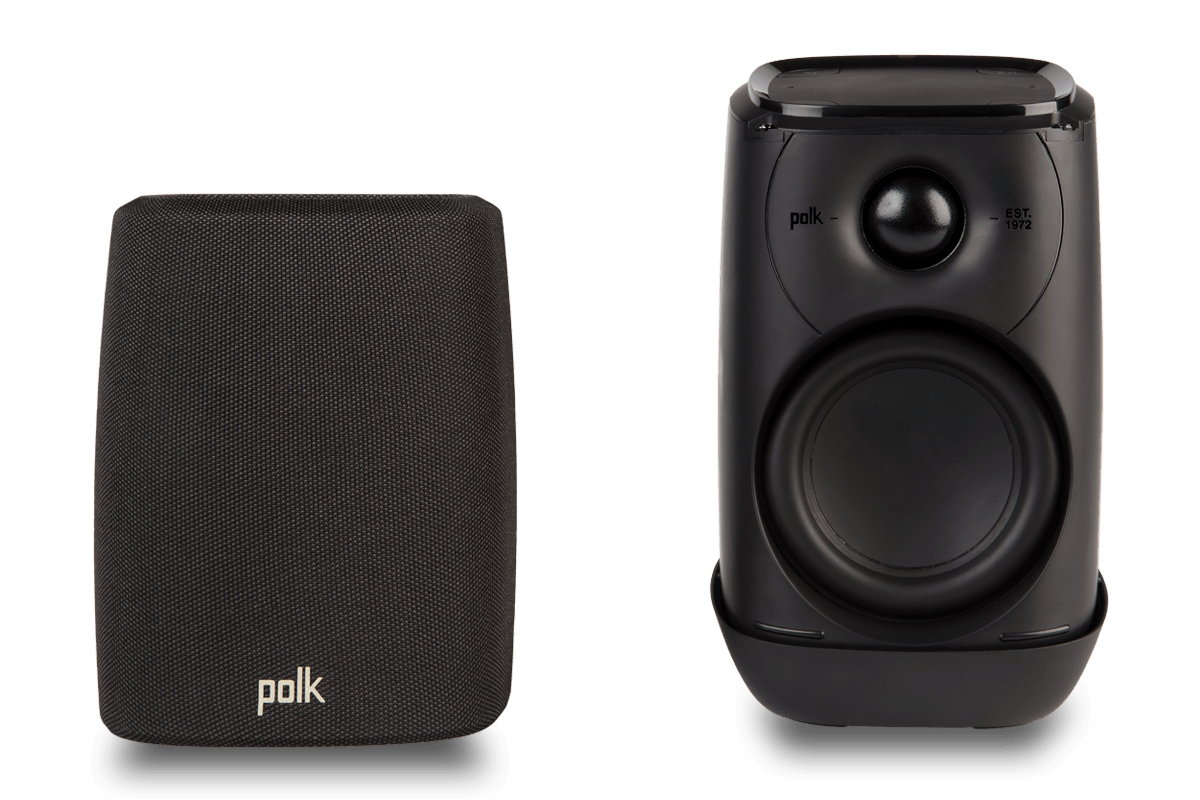 The controls on the top panel are simple: volume up/down, play/pause, and a button that activates Google Assistant -- though you’ll probably prefer to trigger the Assistant with a simple “Hey, Google.” A button on the back mutes the microphone array that picks up your voice commands. The Assist also has Bluetooth built in, if you want to pair it with a smartphone or tablet that’s not connected to your network. Because the Assist works with Google’s Chromecast, it can be used in a multiroom system with other Chromecast products.

Like other smart speakers, the Assist streams its content from the Internet through a Wi-Fi connection, using your choice of streaming services. Whether or not you want to stream your music through a smart speaker, there’s no denying that it’s convenient. 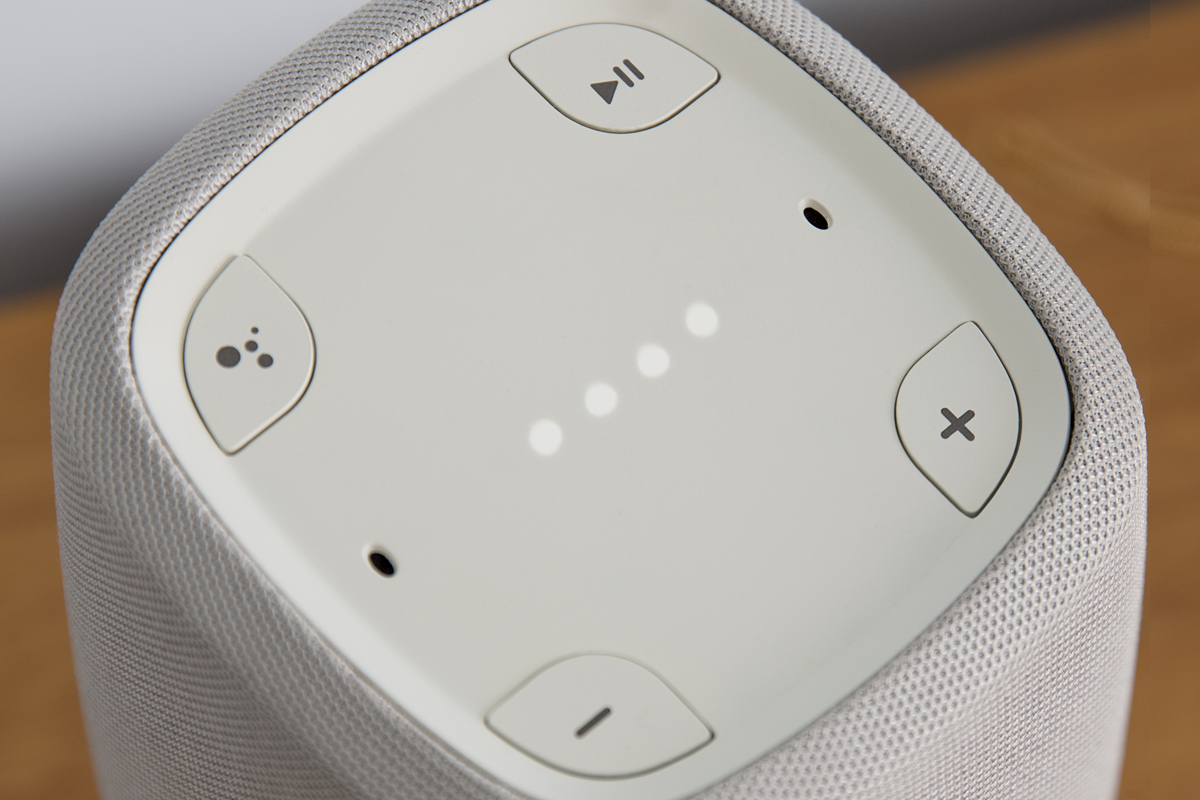 There’s not much in the box, just the Assist and an AC wall wart, plus some paperwork: a sheet describing what the five buttons do, a quick-start guide about as long as this paragraph, and the usual boilerplate about the warranty and FCC certification.

The best indication of the Assist’s ease of setup and use is the fact that its main operating manual is a small sticker on the top panel. It tells you to plug in the speaker, download the Google Home app (available for Android and Apple iOS devices), and follow its instructions. I already have a Google Home speaker, and I’ve reviewed a dozen or so Chromecast-compatible speakers, so I’ve long since forgotten what I had to go through on initial setup -- but I do remember that it was easy. All I had to do to add the Assist to my system was give the speaker a name (usually, the room it’s in). If you’re new to Google Home, you’ll have to connect it to your Wi-Fi network and tell it what music services you use.

All Google-compatible smart speakers have two microphones on the top panel: one each on the speaker’s left and right sides. This is the cheapest possible way to build a mike array -- the Amazon Alexa products I’ve tried all have seven-mike arrays. Technically, the Assist can’t cancel out surrounding noise to home in on your voice as well as some competitors. However, I found that the Assist’s voice-command system worked dependably even when I yelled at it from across my house. It might be at a disadvantage in a noisier environment. 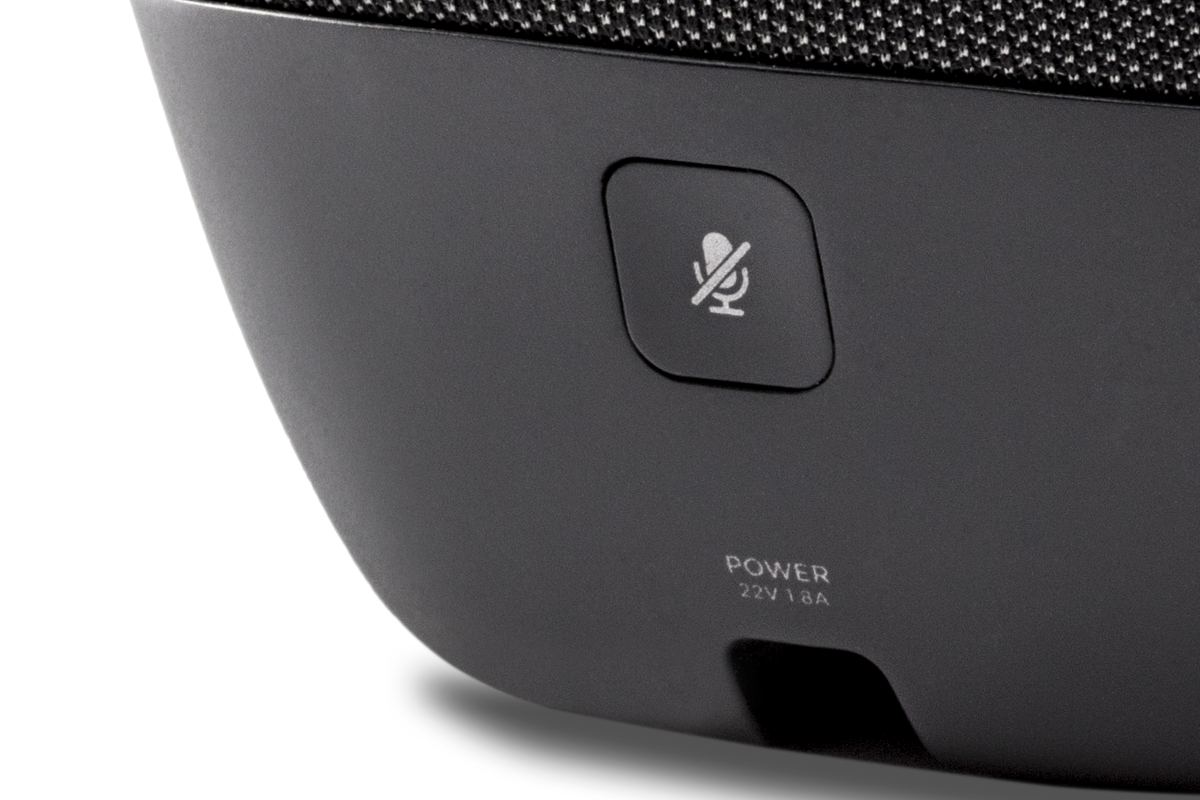 I won’t get into the details of using Google Home, because that’s been covered elsewhere, other than to say that when I asked the Assist to play a specific album, I was delighted that it knew to go to Spotify. With my Amazon speakers, I have to add “from Spotify” to most music requests, unless I luck out and the tune is also available on Amazon Prime Music. I haven’t yet found a way for my Amazon speakers to default to Spotify -- with the Assist, I didn’t have to.

One nice touch is that the Assist allegedly works with the free version of Spotify -- something I couldn’t confirm because I have a paid subscription to Spotify Premium. Last time I checked, my Amazon products all required use of Spotify Premium.

Many people have concerns about being “spied on” by smart speakers. While on a few occasions such products have behaved in strange and baffling ways, I’ve had various smart speakers playing for an average of eight hours a day over the last two years and have never experienced a problem. These speakers can’t work without sending snippets of your voice back to the server farms of Amazon and Google, and if that concerns you, you shouldn’t buy one -- but you also probably shouldn’t buy a smartphone or a recent-model computer, both of which contain voice-command functions.

While the Assist was clearly designed to deliver better sound quality than most Google- and Amazon-branded smart speakers, Polk doesn’t claim that it’s an audiophile product. It’s not stereo, it doesn’t reproduce anything in the bottom octave of bass, and everything it plays is streamed through some sort of audio codec, probably MP3, AAC, or Ogg Vorbis. It’s designed for casual music listening, Internet Radio, and podcasts.

That said, listening to music through the Assist could be quite enjoyable.

One of my favorite test tracks for “blowing up” wireless speakers is Holly Cole’s cover of Tom Waits’s “Train Song,” from her Temptation (320kbps Ogg Vorbis, Blue Note/Spotify). The opening, deep double-bass notes tend to stress the tiny drivers of most wireless speakers -- and even some of the much larger drivers of subwoofers -- but the Assist’s 3.5” woofer handled these notes with no sign of strain, delivering full, clear bass at a normal listening level (averaging about 82dB). Cranking the speaker up to full blast did cause the bass to compress just a bit, making the sound less full, but all I had to do to achieve optimal sound quality was turn the volume from 10 down to 8. 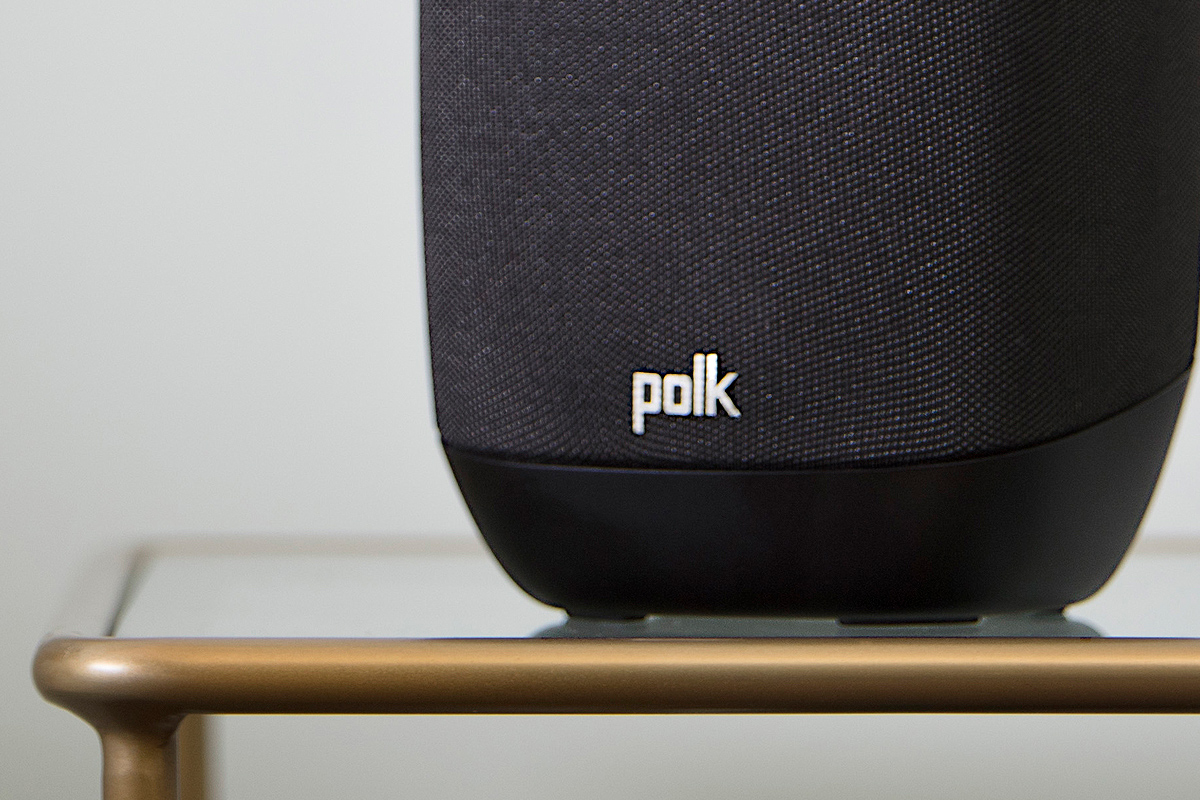 I thought the Assist did a nice job of portraying Cole’s voice, which sounded warm and clear. I did hear just a little bit of sibilance and a very subtle boxy coloration, but the voice reproduction in general was better than I’ve heard from most $200 plastic wireless speakers.

I was pleasantly surprised to hear how well the Assist sorted out all the different instruments in “Rose,” from jazz bassist Martin Wind’s Light Blue (320kbps Ogg Vorbis, Laika/Spotify). In addition to Wind’s double bass, “Rose” contains brushed drums, piano, organ, trumpet, and tárogató (basically, a clarinet with a conical bore), all weaving in and out of the music. The Assist clearly reproduced the character of each instrument, making each easy to pick out in the mix. Most inexpensive wireless speakers would turn a complex mix such as this into mush, blurring the distinctions among instruments.

Walking around the Assist as I played “Rose” and other tunes, I was happy to hear that the treble didn’t roll off much as I moved; it even sounded pretty good from behind. The front-firing drivers can’t produce the omnidirectional dispersion offered by some smart speakers, but the Assist’s small drivers and obviously well-designed crossover resulted in dispersion that was very broad -- the sound nicely filled my room.

More technologically intense recordings, such as Drake’s single “Nice for What” (320kbps Ogg Vorbis, Cash Money/Spotify), pressed the Assist closer to its limits. While the deep electronic-bass tones in this recording sounded clear and strong, as had the deep double-bass notes in the Holly Cole track, the electronic kick drum -- it’s actually pitched a bit higher than the bass notes -- caused the Assist’s compressor and/or limiter to kick in and clamp down on the drum’s sound in a way I could easily hear. This probably bothers me far more than it does the typical smart speaker user, because I hear this effect a lot when measuring the output of subwoofers, but it does mean you’ll need something bigger if you want to throw a party. 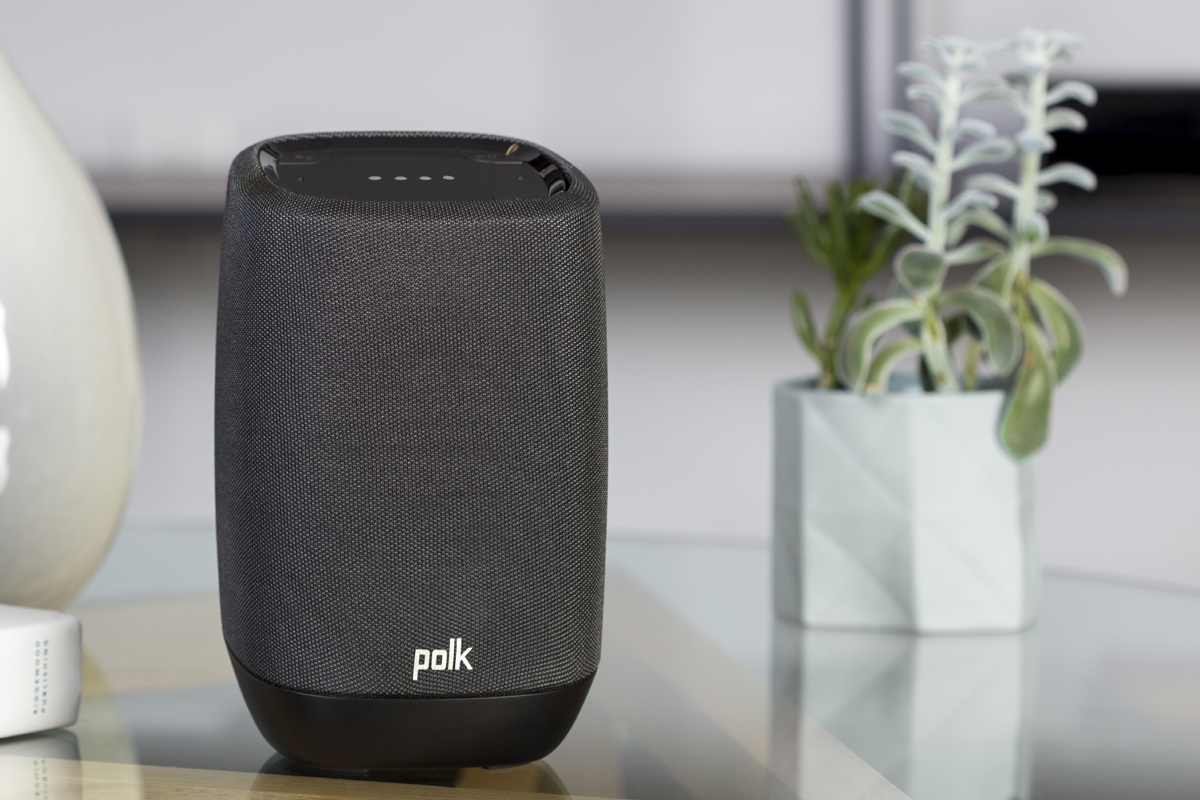 The only music with which I felt that the Assist could function only as a background-music speaker was well-recorded classical music -- such as the second movement of Vivaldi’s Flute Concerto No.1 in F, RV 433, “La tempesta di mare,” performed by Emmanuel Pahud with Richard Tognetti conducting the Australian Chamber Orchestra (320kbps Ogg Vorbis, Warner Classics/Spotify). Tonally, the recording sounded fine, and none of the instruments sounded particularly colored or unnatural -- but I missed the detail, air, and spaciousness that I hear from this recording through a decent conventional stereo system.

An obvious competitor for the Polk Assist is the Sonos One ($199), a two-way speaker with Amazon Alexa built in (Sonos says that built-in Google Assistant will be added sometime this summer). I don’t have a Sonos One, although I’ve used one at a friend’s home. My impression was that it sounds pretty good, but its microphone array and processing seem subpar; I found I often had to get within 6’ of the One before it would respond to my voice commands.

I do have a Sonos Play:1 wireless speaker ($149), which is similar to the Sonos One in size and configuration but lacks voice command. In my comparison, the Assist generally, but not always, sounded better. The Polk seemed to have a flatter, less sculpted, more natural sound; the Sonos seemed to have a more smoothed-off treble and a bump in the bass.

While the Play:1’s bass sounded annoyingly compressed with Cole’s cover of “Train Song,” the Sonos played louder and sounded more composed with “Kickstart My Heart,” from Mötley Crüe’s Dr. Feelgood (320kbps Ogg Vorbis, Mötley/Spotify), played at maximum volume on both units. The Play:1 still sounded reasonably full and clean at this setting, with an average SPL of 93dB at 1m during the first verse. Under the same conditions, the Assist’s sound thinned out; it could manage only 90dB.

The Polk Assist is my favorite of all the smart speakers I’ve tried to date. Unlike my Google Home and Amazon Echo speakers, which I never play at anything louder than background-music levels, the Assist sounds good enough that I want to listen to music through it at moderately loud volumes. The competition in this category is heating up fast -- by the end of the year, the Assist will have many well-designed competitors. But for now, the Polk Assist is a smart speaker that the average listener can love -- and that an audiophile can probably tolerate.