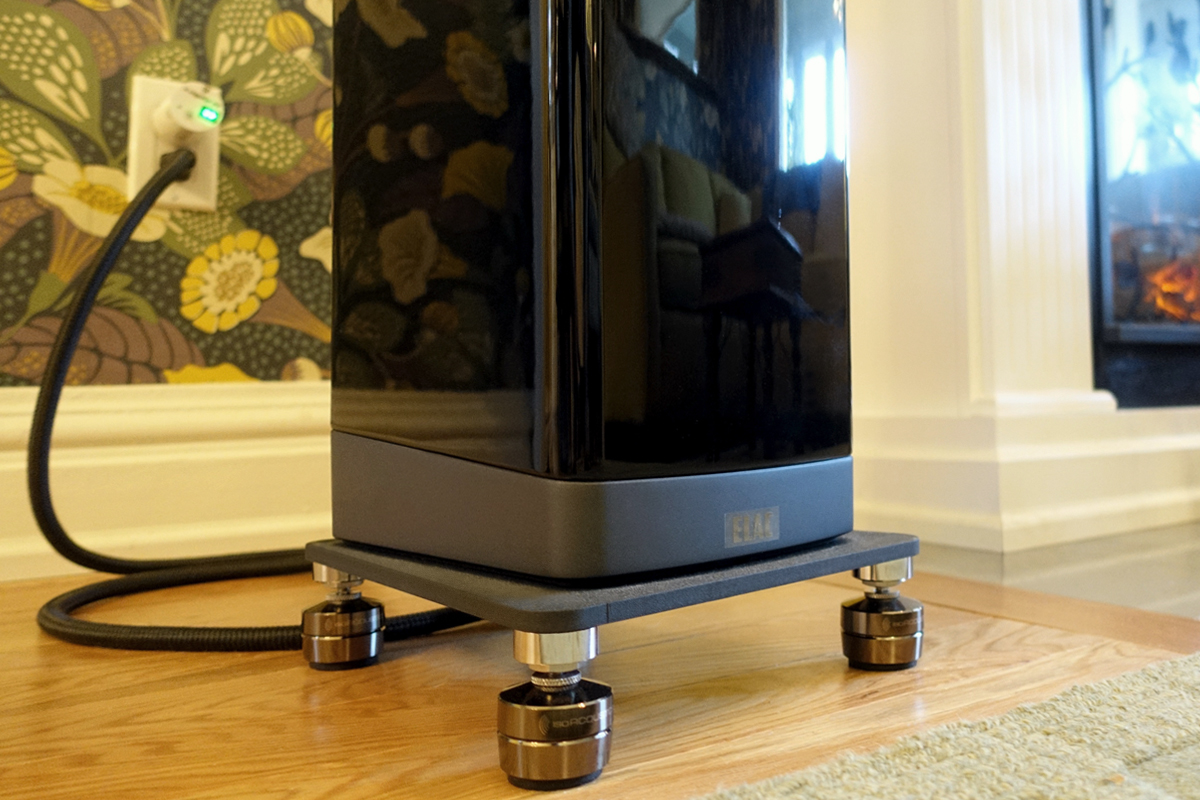 During the 2018 Toronto Audiofest, I had an interesting conversation with an industry colleague about active speakers and streaming music. As previously observed on Simplifi, my living room can’t accommodate a conventional component system comprising amps and passive loudspeakers. Nor can it accommodate physical media such as CDs and LPs. For that reason, I’ve built my main hi-fi system around a pair of Elac Navis ARF-51 active speakers ($4599.96/pair, all prices USD), which have 300Wpc of built-in amplification. I stream all my music to the living room over our home network.

The configuration of my system wasn’t driven only by necessity. I admire the engineering elegance behind closed systems such as these, in which everything is designed to work together. And I enjoy the absence of technological clutter that’s especially important in multipurpose living areas such as the main-floor living room of our 1920s Toronto rowhouse.

My industry colleague got all of that, but saw things differently. Conventional component hi-fi keeps him more engaged in audio as a hobby, he said—part of the fun of hi-fi is the thrill of the chase, the pursuit of ever-better sound. Conventional component audio offers more scope for the fun of component matching and experimentation, and the tweaking and tinkering that entails. While admitting that all that can get expensive, my friend also opined that an active system locks you in: If your speakers, amplifiers, and primary music source are integrated into a single product, the only way to upgrade your system is to start all over again. I had to admit that he was right.

Then I started thinking about some tweaks that can be applied to Simplifi’d hi-fi, some of which were on display at the Audiofest. I’ve since had direct experience with two of them. 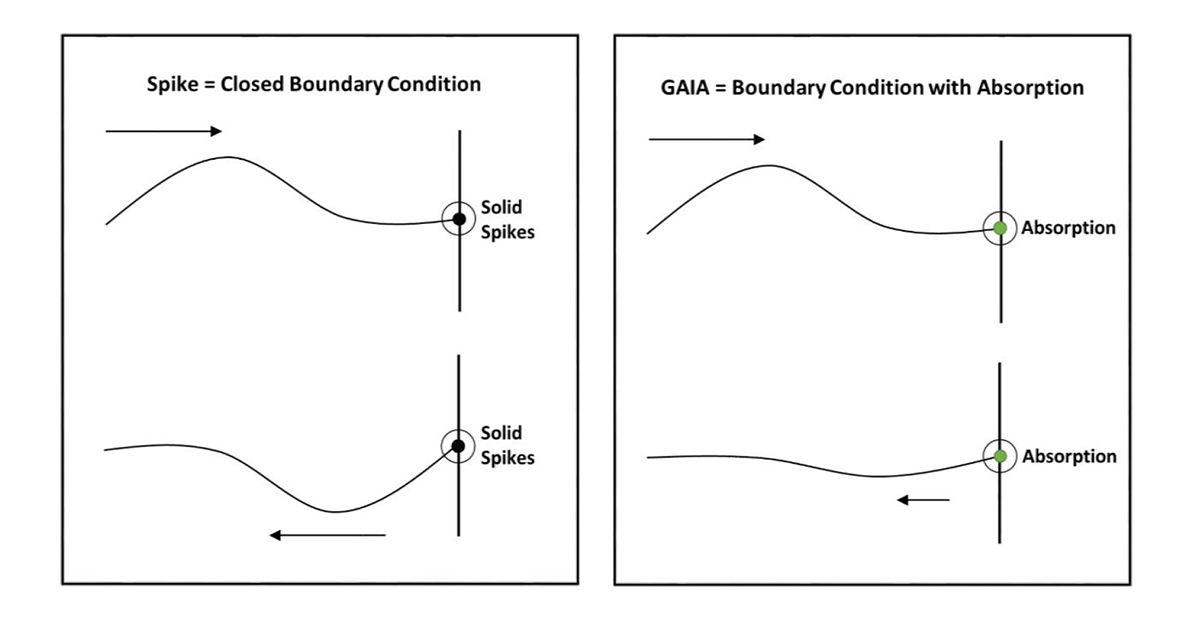 For this article, I spoke by phone with Dave Morrison, founder and president of IsoAcoustics, about the problems the GAIAs are designed to address. Normally, some of the mechanical energy generated by the interaction of a speaker’s drivers and cabinet will excite any surface the speaker sits on, causing vibrations that blur and distort the sound. And some of that energy will be fed back into the cabinet, which will smear transients and blur microdetail. Moreover, if the vibrations reflected by the supporting surface and fed back into the speaker cabinet are the same for both channels, that will cause the soundstage to narrow, Morrison said.

The screw that attaches a GAIA isolator to a speaker terminates on its other end, inside the isolator, in a soft material with very different propagation characteristics than the screw end that attaches the isolator to the speaker. This lowers the frequency of vibrations enough to transduce their energy into heat. This material is not homogenous, which means that a GAIA is directional—to have its full effect, a GAIA must be installed with its IsoAcoustics logo facing to the front or rear, so that its dampening materials are aligned with the motion of the loudspeaker’s drivers. 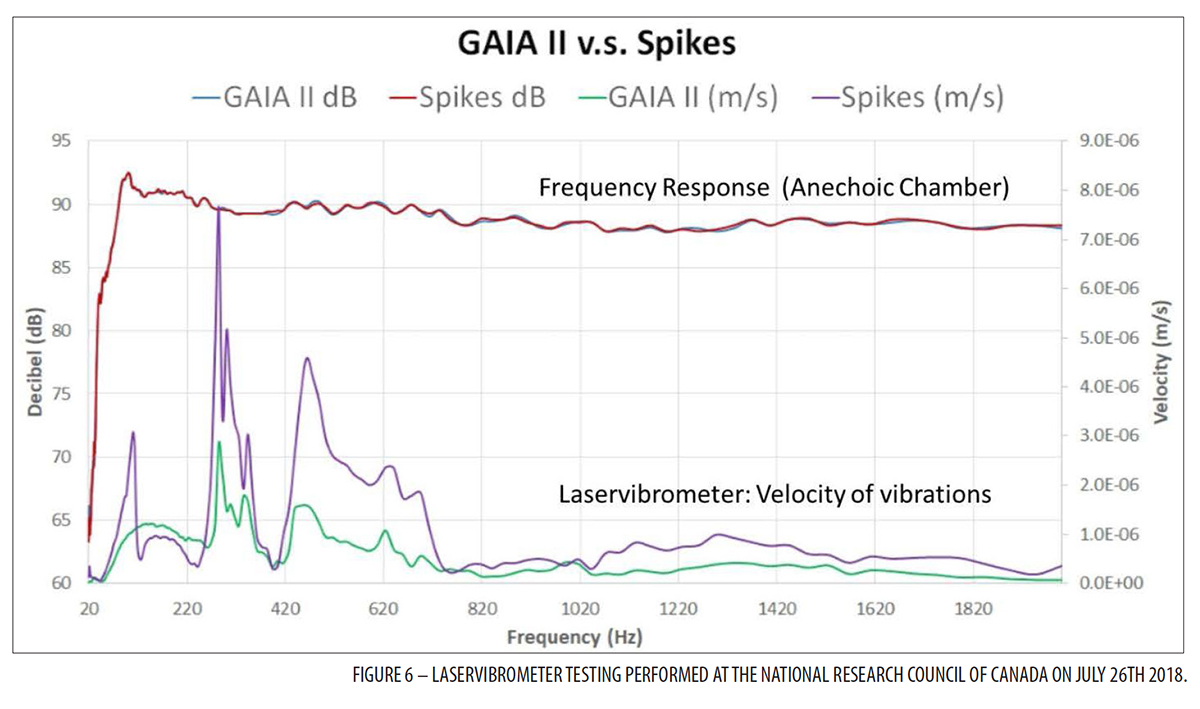 Morrison has measured speakers in the anechoic chamber at the acoustics lab of Canada’s National Research Council, in Ottawa, Ontario, comparing their frequency responses with and without GAIAs installed. Turns out that the frequency response remained unaffected by the isolators—but laser vibrometer measurements of the speakers’ cabinets revealed marked reductions of the velocity of cabinet vibrations with the GAIAs in place.

I was already familiar with IsoAcoustics, having used their professional-series ISO-L8R155 desktop stands ($109.99/pair) in my previous home, whose third-floor loft I’d made into a dedicated music room. Those stands sat between my KEF LS50 (and, later, Totem Acoustic Signature One) speakers and the lively built-in shelves opposite my listening chair. As I wrote in July 2015 for the Canadian magazine WiFi HiFi, the IsoAcoustics stands “delivered a real improvement in clarity, speed, focus, and dynamics.” I still use those stands for auditioning minimonitors placed atop the credenza in my basement family room.

Moreover, I’d heard active demos of the GAIA isolators at previous audio events, including the 2017 Consumer Electronics Show, during which Morrison switched between two pairs of Focal Aria floorstanders, one equipped with standard floor spikes, the other with GAIA II isolators. The Arias with GAIAs produced a wider soundstage, with more precise locations of instruments and voices.

I filed this information in a set of seldom-used neurons, and recalled it in mid-2019, when I replaced my Dynaudio Focus 200 XD active stand-mounted speakers with the Elac floorstanders. Could a set of GAIAs deliver improvements in sound similar to those I’d heard in that CES demo?

Fast forward to December 2020. After surviving a dose of the current plague in the spring, and enduring confining but necessary lockdowns, I decided I deserved a Christmas present. I headed over to TruTone Electronics in Mississauga, Ontario, a 20-minute drive from home sweet home, and bought two quartets of GAIA III isolators.

Before attaching GAIAs to Elacs—it took about 15 minutes—I listened to some familiar tracks, to refresh my aural memories of them. Per Morrison’s pitch, one of the purported benefits of GAIA isolators is more precise imaging, and this they delivered in spades. They also widened the soundstage, made transients faster, and improved microdetail.

In “Angel of Doubt,” from the Punch Brothers’ All Ashore (24-bit/96kHz FLAC, Nonesuch), the aural images of Chris Thile’s mandolin, Noam Pikelny’s banjo, Chris Eldridge’s acoustic guitar, and Paul Kowert’s double bass were more clearly delineated and three-dimensional. As the players plucked and strummed these instruments’ strings, the transients were faster, their decays fuller. And I was more aware of the other musicians’ sung harmonies behind Thile’s lead vocal. 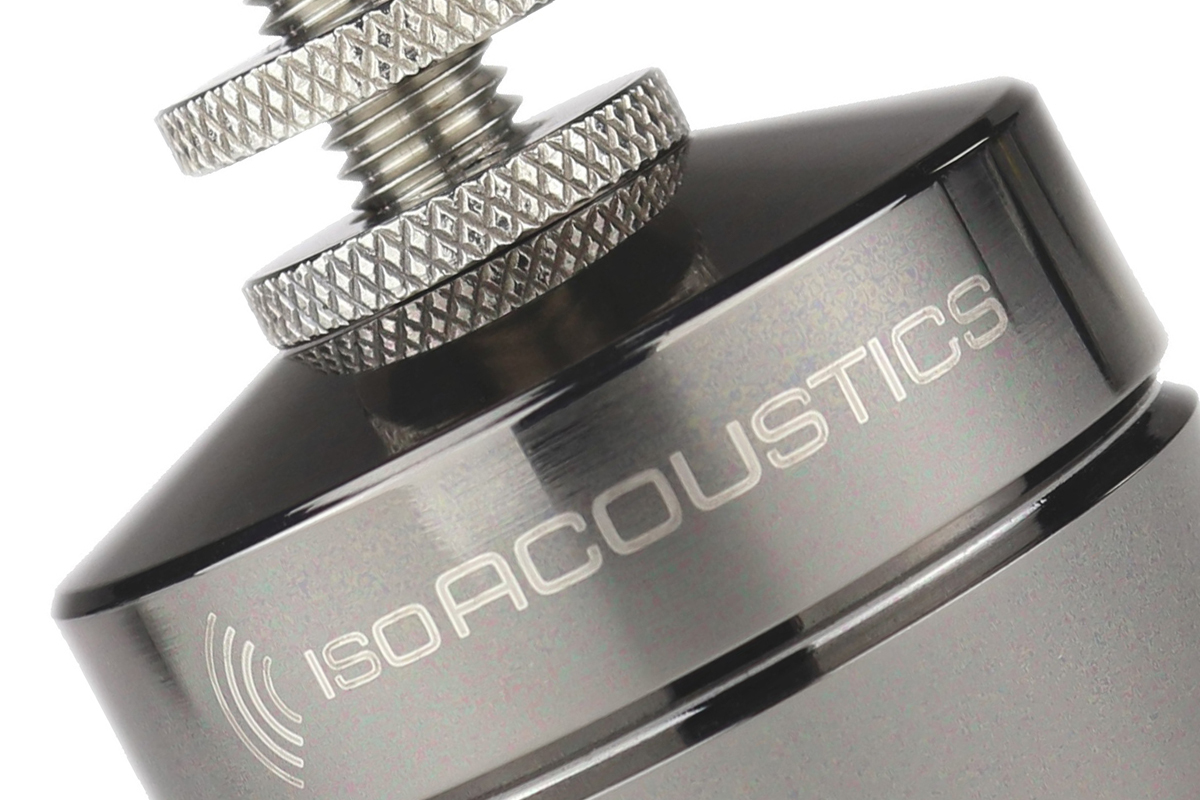 So it went with other favorite tracks. With “I Fall in Love Too Easily”/“The Fire Within,” from pianist Keith Jarrett’s At the Blue Note (16/44.1 FLAC, ECM/Qobuz), I was more aware of Jarrett’s phrasing—his arpeggiated chords were delineated more clearly. (For better or worse, I was also more aware of Jarrett’s vocalizing.) Jack DeJohnette’s smacks on the various instruments of his drum kit were more precisely positioned. The attacks of sticks on drums and cymbals were clearer. On the Tord Gustavsen Ensemble’s Restored, Returned (24/96 ALAC, ECM), which includes Gustavsen’s extraordinary settings of four poems by W.H. Auden, I was more aware of singer Kristin Asbjørnsen’s expressive shifts in volume and pitch, and Gustavsen’s piano phrasing.

I could go on and on, but you get the picture. As an upgrade, the IsoAcoustics GAIA III isolators were a complete success. Two quartets of GAIA IIIs cost less than one-tenth the price of a pair of Elac Navis ARF-51s. They easily justify that investment.

Another product I saw at the 2018 Toronto Audiofest was iFi Audio’s AC iPurifier ($99), a little gadget that plugs into an AC outlet and reduces line noise. At the time, I wasn’t using any form of power conditioning for the electronic components in our living room, and this one looked interesting.

In the third-floor man cave of our previous home I’d used a Torus Power TOT Max power conditioner ($1499). Like all Torus conditioners, the TOT Max has a big toroidal transformer that isolates connected components from the household and utility power lines, as well as Narrow Bandwidth Technology, which Torus claims blocks electromagnetic and radio-frequency interference (EMI and RFI) on the line.

I found the TOT Max very effective. Substituting it for the Energy EPC-4000 surge suppressor I’d been using for years resulted in a major “improvement in blackness, speed, and especially dynamics,” as I described the difference in an April 2015 article for WiFi HiFi. “Not only were transients faster, sustains and decays were more natural.” When I removed the Torus conditioner and put the Energy surge suppressor back in, “the sound became more veiled and grainier. Transients became duller . . . and the overall presentation became smaller.”

There was no way I could fit the TOT Max, a heavy black box measuring 12″W x 4″H x 14.5″D and weighing 38.9 pounds, into the living room of our new home. Even if I could, there was no way I could plug in both of my active speakers, which were placed on opposite sides of a faux fireplace. So using the TOT Max in our new home was a non-starter. Might I get similar benefits from iFi’s diminutive AC iPurifier? 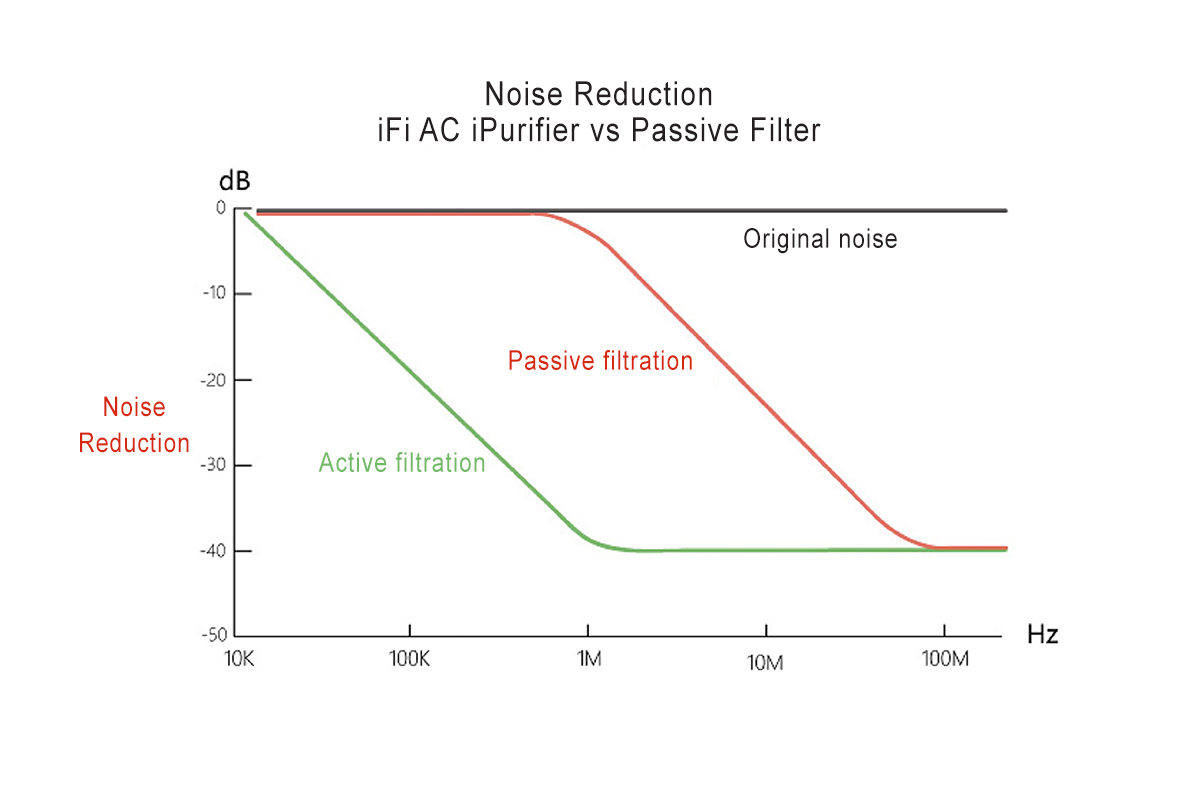 iFi claims that the AC iPurifier removes RFI noise induced in the home’s power line by such external sources as radios, TVs, and mobile devices, as well as noise from digital circuits and power supplies in components connected to the AC line.

In August 2019, iFi introduced the PowerStation ($499), a power strip that incorporates an AC iPurifier. The PowerStation’s Intelligent Ground circuit drains noise from switching power supplies, confirms that the polarity and grounding for connected components are correct, and prevents ground loops. The North American version has eight outlets; the UK and European versions have six. 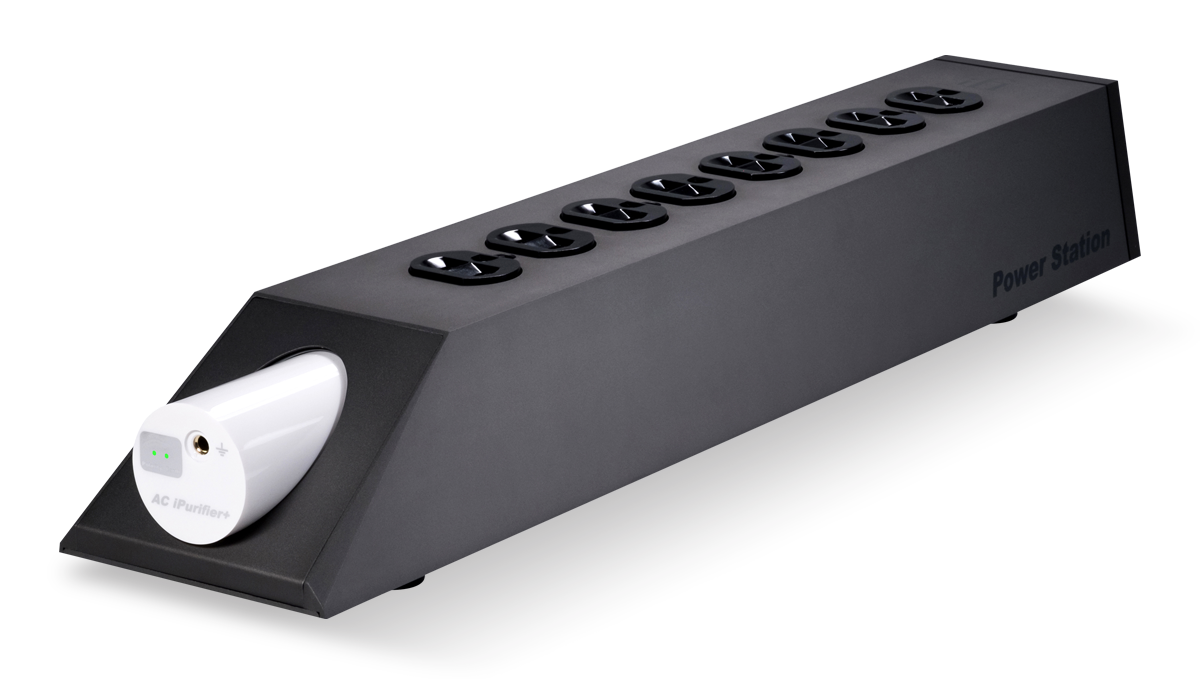 iFi supplied review samples of the AC iPurifier and PowerStation, and to the latter I connected all of the components on my small equipment rack: an NAD Classic C 658 BluOS streaming DAC-preamp; a Samsung UN55L003 55″ Frame TV and its One Connect set-top box; a Samsung UBD-M7500 Ultra HD BD player; an Apple TV 4K; and the power supplies for a Google Wifi adapter and Chromecast Ultra. Measuring 18.8″L x 3.8″W x 2.9″D, the PowerStation is just narrow enough to fit between the small end table that serves as my equipment rack and the adjacent wall.

Because of the layout of my room, I couldn’t plug my Elac Navis ARF-51 active speakers into the PowerStation—they connect directly to wall outlets. Per iFi’s recommendation, I plugged the AC iPurifier provided by iFi into another outlet on the same circuit.

It was interesting comparing the sound with the iFi power products in place, with the sound with the AC iPurifier removed from the outlet, and my electronics plugged into my old Energy surge suppressor, which I normally use in my second-floor office.

When I played a high-resolution download of Russian pianist Pavel Kolesnikov performing Louis Couperin’s Dances from the Bauyn Manuscript (24/96 FLAC, Hyperion) from a Samsung SSD connected to the USB Type-A port of my NAD C 658, the iFis’ most obvious effect was the removal of a thin layer of grit—the background was blacker. The sound of Kolesnikov’s piano was a little clearer, and his crisp attacks sounded a little faster. The soundstage was slightly wider and deeper, and more transparent. 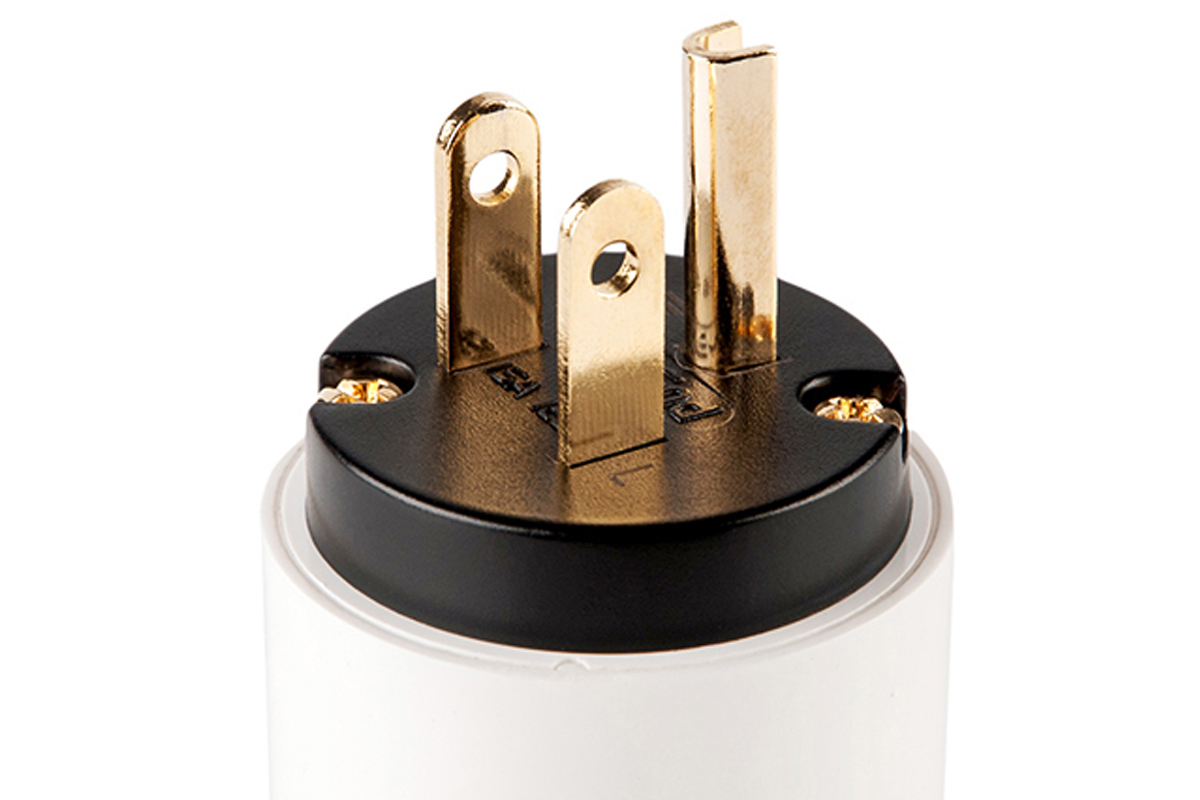 In Norah Jones’s cover of Hank Williams’s “Cold, Cold Heart,” on her Come Away with Me (24/192 FLAC, Blue Note), also played from my SSD and C 658, her voice sounded more embodied and three-dimensional with the iFi power products. Lee Alexander’s double bass had more snap; transients were slower without the iFis. As with the Couperin recording, the iFis removed a layer of grit; without them, the sound was more veiled and dull.

Thrill of the chase

I love having an elegant, low-footprint music system in my living room, where everyone can enjoy it. I also enjoy the pursuit of better sound. While I agree with my friend that Simplifi’d hi-fi doesn’t offer as much scope for tweaking as does component hi-fi, it still offers many ways to participate in audio as a hobby—as these examples attest.